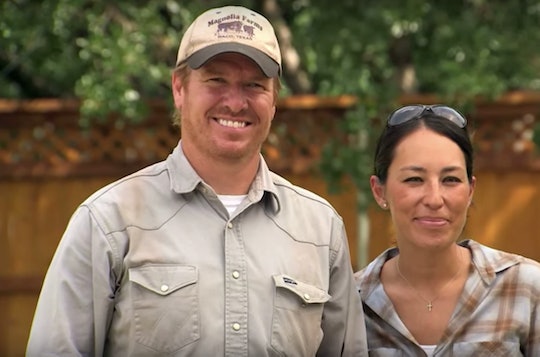 One of America's favorite television couples is in the middle of a lot of life changes at the moment. From their hit show ending, to their recently announced pregnancy news, the stars of HGTV's Fixer Upper are on the rise. But now, fans have another question: when will Chip and Joanna Gaines open their new restaurant? The charming pair is definitely keeping themselves busy.

In a new Instagram post, Joanna gave an update about the couple's latest venture, writing that the "restaurant is getting so close," under a photo of the couple marking their handprints in the concrete at the site. Previously, it was reported that the Gaineses were renovating a restaurant to open their own breakfast joint, to be called Magnolia Table, of course.

According to People, "the couple previously said the restaurant will be open by the end of 2017," but given Joanna's latest update, "fans can now expect to dine there in the next couple months." So, pack your bags Fixer Upper fans; not only can you go to Waco, Texas to visit the famous silos and eat at delicious food trucks, but you can also soon enjoy a delicious breakfast at the new Magnolia Table. Basically, fans of the show are about to get even more Chip and Joanna business to support.

For the Gaines family, this latest project definitely appears to be a total dream come true. On her blog, Joanna wrote that the new restaurant was also something that was a bit of a passion project:

After it closed its doors in 2016, we purchased the old Elite Cafe. It had been a Waco icon for nearly 100 years, and we couldn’t let a place with such a rich history be forgotten. Our family has so many great memories from Sunday brunches at the Elite, and judging by the walls on the inside of the building (which were lined with framed photos representing the restaurant’s past) I’m convinced that this place holds at least one memory for nearly everyone in Waco, Texas.

Unfortunately, it seems as though Elite Cafe had to close its doors after being open for nearly a century. But, the Chip and Joanna were there to try and restore some of that good, old-fashioned magic. Oh, and in case you weren't aware, Joanna is doing all of this while she's pregnant with their fifth child.

On Jan. 3, the couple announced that Joanna was pregnant with their fifth child, and they clearly couldn't be happier. And while they're obviously ecstatic now, in a June 2017 interview with People, Joanna explained that Chip wasn't always on board with having more kids. "Chip thinks we’re done," the 39-year-old said. "I would love to have another baby — or twins! The kids are always asking me, 'Mom, can you have another baby?'" And well, it looks like they have. And if you count their new restaurant, they really are having two new "babies," aren't they?

OK, OK, obviously there's a big difference between a new business and an actual human being, but you get my point. What's more, while Magnolia Table will mostly be serving breakfast food, that won't be the only thing on the menu. According to Joanna's blog:

Magnolia Table will be serving breakfast, brunch & lunch, so in addition to Chip’s favorite breakfast items, you will also find his famous ham sandwich on the menu. A couple of the crowd favorites here at the office are the Farm eggs benedict, the Gaines Brothers Burger, and of course our homemade pies!

If you've never been to Texas, now is definitely the time to go check it out. After all, it won't be long before Magnolia takes over the world.