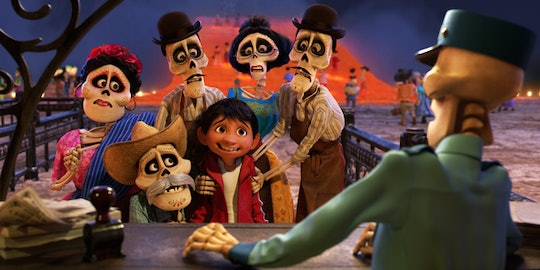 Here's When 'Coco' *Could* Be Available On Netflix

It's no secret that Disney knows how to make some serious blockbuster hits. From Tangled to Frozen, and everything in between, the production company knows what it's doing. And when Disney partners up with Pixar, it's sure to be a success. So, when it comes to the latest hit, fans are likely dying to know when Coco will be available on Netflix. The movie is still in theaters, but fans are already excited to be able to stream it from the comfort of their couches. And as Disney prepares to launch its own streaming site by 2019, it would only make sense for viewers to wonder when their latest family film would be available to stream.

For now, one website theorizes, although not confirmed, that Coco could be available for streaming sometime in 2018, explaining that "Disney Pixar’s Coco should be available to stream on Netflix by November 2018," based on previous theater-to-streaming time frames. Romper has reached out to Disney for comment on whether Coco is expected to stream, and is awaiting a response.

Although no streaming date has been confirmed as of yet, fans of the widely popular film would likely welcome its arrival to watch whenever they please. The movie has been an inspiration for many in the United States, as it's one of the few Disney films to not focus on princesses, and instead, centers in on Mexican-American culture.

People have been lining up to see Coco, as Variety reported that "Disney-Pixar’s animated comedy Coco is heading for a third straight winning weekend at the North American box office during what’s expected to be a moderate frame." Coco is clearly making waves, but if you're like me and haven't made it to the theater just yet, here's what you're missing out on, according to The Atlantic:

Miguel Rivera (Anthony Gonzalez) is a 12-year-old boy in Mexico whose greatest desire in life is to be a musician like his idol, the mid-century legend Ernesto de la Cruz (Benjamin Bratt). Alas, Miguel’s great-great-grandmother was abandoned by her musician husband, and the Rivera family has enforced an iron-clad policy against music ever since. Instead, each subsequent generation has gone into the family business of making shoes.

Then, when Miguel decides to "borrow" de la Cruz's guitar for a musical competition, he is magically taken to the Land of the Dead as soon as he starts to play the instrument.

The film has been hailed as a victory for Disney and Pixar, so it would only make sense for the company behind it to want to extend its success by releasing it to Netflix, where it's likely even more people will be able to watch it, whenever that may happen.

The Atlantic describes Coco as "a tale told with considerable wit—this is one of Pixar’s funniest films—and genuine tenderness" and "there are a few nice twists and reversals along the way." Seriously, Coco has been a massive success, and there's no doubt that having it available on Netflix would make both children and parents happy.

As there's no official release date for Coco to arrive on Netflix at the moment, it could happen sooner than November of next year. Another website, What's On Netflix, also notes that, "From the theatrical release, Netflix typically adds the movies around 9-10 months afterwards," which would mean that families might be able to stream Coco as soon as August of 2018. Again, Disney and Pixar have yet to announce anything.

But, Netflix has been procuring a number of popular children's movies lately, including Zootopia, Sing, The Boss Baby, and more. So it wouldn't be that much of a surprise to see Coco on the streaming site one day as well.