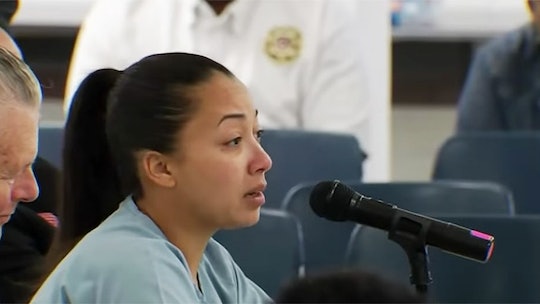 After 15 Years In Prison, Here's When Cyntoia Brown Will Be Released

One of the most high-profile court cases that grabbed the nation's attention in 2018 was that of Cyntoia Brown, a Tennessee woman who was convicted in a murder at just 16 years old and sentenced to at least 51 years in prison. That attention and activism from social media and celebrities worked, and the outgoing Governor of Tennessee, Bill Haslam, has commuted Brown’s sentence, granting her full clemency, and assigning her parole and community service instead, according to The Tennessean. But when will Cyntoia Brown be released?

The release date is set for Aug. 7, according to The Tennessean. At that point, Brown will begin a 10-year parole period during which she will be required to put in at least 50 hours of community service. That shouldn’t be a problem for Brown, who has worked hard during her 15 years in prison to rebuild her life, according to WGN. She earned her GED and a college degree, and hopes to now found a nonprofit that works on social justice issues, The Tennessean reported.

In her statement about the commutation, according to The Washington Post, Brown said: “With God’s help, I am committed to live the rest o my life helping others, especially young people. My hope is to help other young girls avoid ending up where I have been.”

Brown’s case caught the attention of celebrities including Ashely Judd, Kim Kardashian West, and Amy Schumer, according to CNN. Her story is a sad one, and was featured in a 2011 documentary that aired on PBS, Me Facing Life: Cyntoia’s Story.

In his decision, Haslam called Brown's case "tragic and complex", according to a press release:

Cyntoia Brown committed, by her own admission, a horrific crime at the age of 16. Yet imposing a life sentence on a juvenile that would require her to serve at least 51 yeas before even being eligible for parole consideration is too harsh, especially in light of the extraordinary steps Ms. Brown has taken to rebuild her life.

Brown was given up for adoption by a mother who was addicted to alcohol and drugs, according to The New York Times. At just 16 years old, she ran away from her adoptive family and was forced into teen prostitution and sex trafficked, the Times reported. In 2004, according to court documents, she agreed to have sex with Johnny Allen for the amount of $150. Later, while Allen slept, she shot him and fled the home with cash, guns, and the victim's car.

Brown claimed that she feared for her life, citing the victim's odd behavior and collection of guns. In 2006, the court found her guilty of first-degree murder and aggravated robbery, according to The New York Times, and sentenced her to 51 years to life in prison.

In the intervening years, Tennessee has revised its sentencing guidelines for juveniles, as CNN reported, and the nation's view of sex trafficked children has changed. WZTV anchor Stacy Case told CNN, "If Cyntoia Brown were tried today, legal experts say she would not have been tried in the same way. Our courts today would view her as a child sex slave...she would be viewed as a victim."

In his statement on the Brown decision, Gov. Haslam said:

While we have spent a considerable amount of time studying and implementing sentencing and criminal justice reform in our state, there is more work to be done. I am hopeful serious consideration of additional reforms will continue, especially with respect to the sentencing of juveniles.

What Cyntoia Brown has been through is unimaginable for most, and hopefully her case will, indeed, spark reform for the nation's most vulnerable.