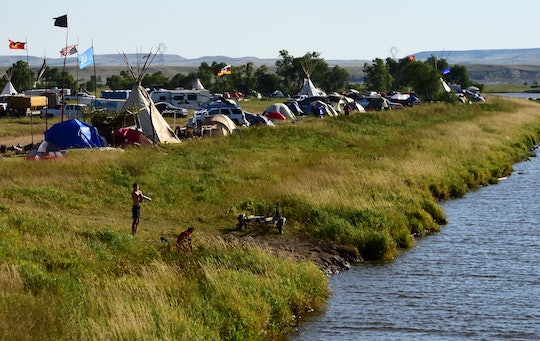 When Will Dakota Access Pipeline Construction Be Finished? The Missouri River Is The Issue

The construction of the Dakota Access Pipeline in North Dakota has sparked ongoing protests and widespread outrage since July. Protesters have been camped out at the Standing Rock Sioux reservation protesting the construction of the pipeline. Hundreds of protesters have since been arrested, with recent reports of officers using tear gas, water cannons (during freezing temperatures), and rubber bullets. (The Morton County Sheriff's Department has not responded to Romper's request for comment about these techniques.) Though construction for the pipeline has already been underway, the proposed portion that would cross under Lake Oahe on the Missouri River is what's most at stake for the Standing Rock Sioux tribe and those standing in solidarity. So, when will the Dakota Access Pipeline construction be finished? It continues to be a dire situation.

The Standing Rock Sioux Tribe, other Native Americans — who prefer to be considered water protectors, and many others around the world standing in solidarity, fear the construction of the DAPL would endanger the water supply and sacred sites. Furthermore, opponents of the pipeline have cited an 1851 treaty that promised the land to its Native people, and that the pipeline would therefore be violating.

According to a report by Mother Jones, the Army Corps of Engineers announced in mid-November that it would halt the construction of the pipeline under Lake Tahoe until further information of its environmental effects were revealed.

A clip of the announcement read:

The Army has determined that additional discussion and analysis are warranted in light of the history of the Great Sioux Nation’s dispossessions of lands, the importance of Lake Oahe to the Tribe, our government-to-government relationship, and the statute governing easements through government property...

...While these discussions are ongoing, construction on or under Corps land bordering Lake Oahe cannot occur because the Army has not made a final decision on whether to grant an easement. The Army will work with the Tribe on a timeline that allows for robust discussion and analysis to be completed expeditiously...

As Mother Jones reported, the company heading the construction, Dakota Access LLC, a partner of Energy Transfer Partners, LP, spoke out against the Corps' mid-November announcement to halt the construction. Kelcy Warren, CEO of Energy Transfer Partners, said in a press release the halt of construction issue was "motivated purely by politics at the expense of a company that has done nothing but play by the rules it was given... ."

According to a Bismark Tribune report back in October, Dakota Access LLC released a statement revealing the majority of the construction of the pipeline had been completed, with, of course, the nearly 1,200-mile portion under Lake Oahe remaining.

On the Energy Transfer website, the company stated that the pipeline was projected to be in service by the end of 2016 "depending upon regulatory approvals." Romper has reached out to the Dakota Access Pipeline for information on the completion of the pipeline and has not heard back yet.

The US Army Corps of Engineers reportedly issued an eviction notice for Dec. 5 to those protesting the DAPL in North Dakota reportedly citing "safety concerns," ABC news reported. It's an increasingly crucial situation that continues to warrant attention and action.