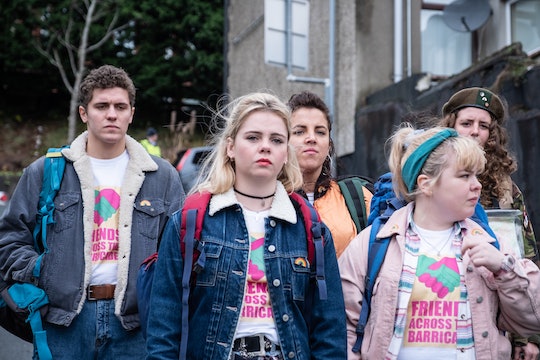 Derry Girls snuck up on fans in the U.S. after the UK show began streaming on Netflix — and became an immediate hit. Since then, the series has also dropped Season 2, leaving fans scouring the web to find out when Derry Girls Season 3 will be on Netflix to avoid withdrawals. For that, I have good news and bad.

First, I'll give you the good news: You will get another season of Derry Girls, so go ahead and celebrate before I drop the sledgehammer. Ready? Season 3 of the Irish hit doesn't have a Netflix premiere date — yet. Sorry.

But if you look at how the first two seasons were handled, the series will likely drop in the UK in the spring of 2020 and (probably) end up in the Netflix "trending" list around this time next year. If it feels like an eternity, I'm with you. The entertainment business runs on its own peculiar timeline, where ratings, fan interest, and scheduling all come into play. There is always the chance filming will begin and end quickly, pushing the premiere date a little closer. But for now, it's all very vague and not at all "class."

The follows Erin (Saoirse-Monica Jackson), Orla (Louisa Harland), Clare (Nicola Coughlan), Michelle (Jamie-Lee O’Donnell), and James (Dylan Llewellyn) as they navigate those tricky teen years, complicated somewhat by the fact they're living in Northern Ireland during the Troubles, a civil conflict between Irish nationalists and British loyalists that spanned decades. While the first season set up the world of the show, the second expanded it as well as the drama for the young stars.

So what comes next? Series writer and creator Lisa McGee (who's life growing up the show is loosely based on), told Radio Times back in April, "I’m just thinking about storylines at the minute. I have a political back story I want to do. It’s a bit scary but I’ll have to start writing things down soon." She later added Season 3 might have one of your fave Derry girls going to a rival gang, with the show focusing on "how the others try to get them back and deal with that." That aside, anyone who's obsessed with the show might want to know if there could be a budding romance between James and Erin in the third season.

“I think there might be,” McGee said. “I’ve always thought James likes her, but I think he maybe doesn’t even understand that yet, and I don’t know when that’ll, it might happen when they’re much older, so it might not actually happen in our show." She added by saying there is definite potential for that relationship to happen, so if you've been rooting for them, it's your lucky day.

I can't give you an exact date for when the third season will arrive, but take comfort in the fact that it is definitely on its way. Until then, I suggest you carve out half a day and watch all 12 episodes of the first two season. Ach are you buzzin'? If you don't understand that reference, you'd better log onto Netflix and redeem yourself already.