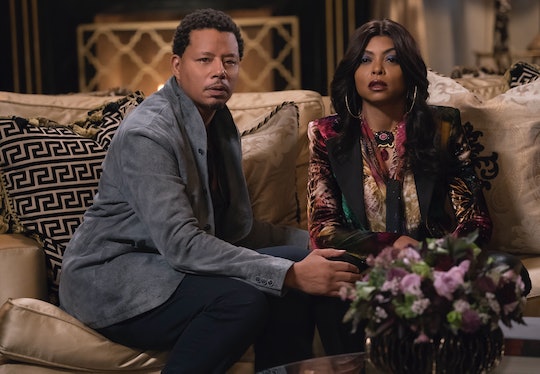 'Empire's Return May Not Be For Quite A While

I'm a huge fan of the holidays, except for one aspect: they mess up my TV schedule. Many primetime shows, including Empire, take a break in the winter months and come back in the new year. So when will Empire return from its winter hiatus? The show typically takes a break every year, and Wednesday's episode "Slave to Memory" is this year's midseason finale. According to The Hollywood Reporter, Empire's ratings have dipped since its first season where it was a breakout hit, but it's still Fox's best-rated drama — so fans shouldn't worry, it will be back... but when, exactly?

Back in November, it was announced that Empire would be taking a production break after the crew finished filming "Slave to Memory." Deadline reported that this production break would last two to three weeks and then resume to work on the rest of Season 4. That occurred the first week of November, so I'm assuming that production picked back up again around Thanksgiving. That doesn't mean, though, that filming resumed right away. When production restarted, writers regrouped to plan out the rest of Season 4. Since the rest wasn't already written, there was nothing more to film after those 2 or 3 weeks. There's been no news since the first week of November, but I wouldn't be surprised if filming hasn't resumed (though I'm sure the writers are working very hard to finish the season).

I'm not going to freak out, though; Empire goes on a winter break every year, so production has it down. In fact, The Hollywood Reporter states that this production break won't affect Empire's airing schedule at all. Looking back at Seasons 2 and 3 (not Season 1, which is an outlier because it started in the spring), the fall finale occurred in December as well. In both cases, the show returned in March. That seems like such a long time, but the fact that the writers are currently scheming how this season is going to end and it's still all going to air in a matter of months is pretty amazing.

There's no set date for Empire's return, but I'd bet money that it will happen in March. The second half of Season 4 will have eight episodes, which would align it perfectly with most of primetime's May endings. What else is typical of Empire? A cliffhanger in the midseason finale. Yes, this is the time where Anika pushed Rhonda down the stairs in Season 2 and viewers didn't know who did it nor if she survived (it was most certainly foreshadowing for Season 3, RIP Rhonda). The fall finale was also when Empire Record's assets were frozen by the FBI in Season 3. OK, Season 3's midseason finale wasn't as major, but it still stirred up enough drama to keep the audience on its toes to come back for the season half.

It's likely, then, that this year's fall finale will also end on a cliffhanger. Entertainment Weekly writer Natalie Abrams commented (spoilers) that an Empire character may die in "Slave to Memory," and it's not just someone random. If this turns out to be true, waiting out the winter hiatus will be more painful than usual. Thankfully, this time of year is ripe with other TV and film distractions, mainly holiday films on Freeform and Netflix. After the new year, though, I'll probably be counting down until March when Empire will finally return. For now, I'll enjoy the midseason finale with the knowledge that not only is Empire eventually returning, but the writers are currently hard at work making it the most explosive second half of the season possible.