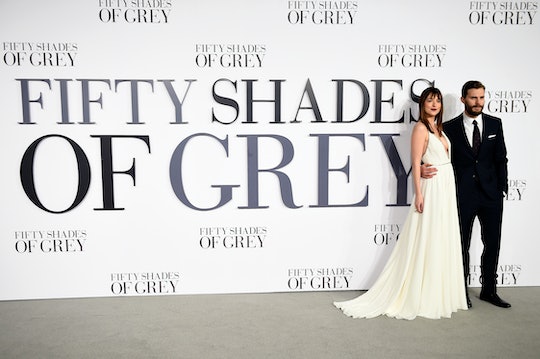 Bad News For 'Fifty Shades Of Grey' Fans On V-Day

It's that time of year again: February is just beginning, and everywhere you look there's marketing and advertising foisting you towards the same thing. No, not Valentine's Day – Fifty Shades of Grey. It's the time when promo for the newest movie in the series is so intense that you see it on billboards and buses, you can't channel surf without catching the trailer, and the film's latest song won't leave your head for weeks. Fifty Shades Darker is making its worldwide debut on February 10, just before Valentine's Day, and before it comes out you may want to catch up on the first one. I won't judge. So when does Fifty Shades of Grey come to Netflix?

While watching a movie like Fifty Shades is best done from the comfort of one's home, preferably while chugging rosé, the film hasn't yet been made available to stream on Netflix. It doesn't seem like it will be available any time soon, either, despite the fact that it came out a couple of years ago. There are no current announcements signaling when or if it will ever be on Netflix, so that seems to be a dead end. If you want to watch it before the new movie is released, then you're going to have to look elsewhere.

If you have a Cinemax subscription, then you're in luck; Fifty Shades of Grey is available On Demand on Cinemax and on their streaming app, Max Go. Unfortunately, that really narrows the streaming options, and leaves you with only a few – and almost all of them involve parting with some of your hard-earned cash. Unless you take advantage of one handy loophole.

Fifty Shades of Grey is available to rent or buy on Amazon, but you can also sign up for a Cinemax subscription there. While it would normally be $9.99 a month, there is also a free trial available that would give you an entire month to peruse all the content Cinemax has to offer without paying a dime – and that includes getting to watch Fifty Shades. Plus, if you enjoy your Cinemax subscription you can hold onto it after the trial is over.

However, if you would rather have the film forever and ever instead of just watching it once (again: I won't judge), then you can always purchase it digitally or on DVD. It may cost a few extra bucks, but who can put a price on love? Or whatever it is that's going on in Fifty Shades of Grey.