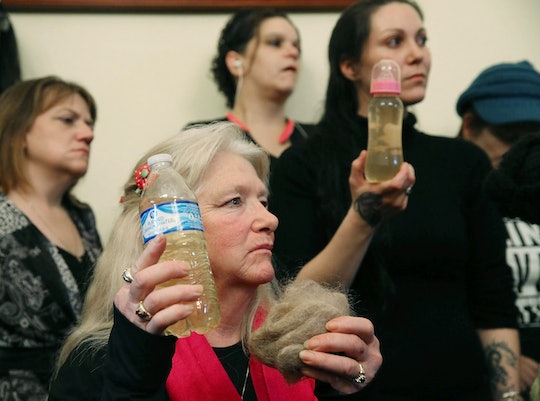 Flint Will Wait Another 3 Years For Clean Water

Back in 2014, Flint, Michigan, became synonymous with the phrase "water crisis" after stories and photos depicting the city's contaminated water supply began to make headlines. When corroded pipes began leaching lead into their water, Flint's residents began a years-long campaign against local, state, and the federal government for clean water. Almost four years later, Flint's water is still contaminated. When will Flint finally have clean water? A court ruled to replace water lines by 2020 — but the damage has already been done.

Several years ago, the city of Flint changed how they got their water. In what was meant to be a temporary move, they began getting water from the Flint River. Locals quickly noticed that the water wasn't clean, but the city did not respond to their complaints, according to NPR. It was only later when the crisis began to spiral that the city began testing the water, only to find it contained E. coli and high levels of total trihalomethanes. Then, city officials discovered that corroded supply pipes had been leaching lead into Flint's water, according to Michigan Live. The EPA was then notified that the city's water treatment plant had not taken the steps necessary to prevent, or fix, the corroded pipes.

In the years since, the residents of Flint have fought a seemingly never-ending battle not just for clean water, but for government accountability. An independent investigation by Virginia Tech revealed that the lead levels in the homes of Flint residents as high as 13,200 parts per billion (5,000 parts per million is considered "hazardous waste" by the EPA). Even with this data in hand, the city of Flint continued to deny there was any cause for concern, according to Michigan Radio.

Several months into the crisis, the city finally switched back to the previous water supply — but the damage had already been done. By the end of the year, Flint's mayor had declared a state of emergency, which validated the concerns of the city's residents, but was felt by many to be too little, too late. By the beginning of 2016, President Obama had declared the situation in Flint a state of emergency and approved FEMA's intervention, as well as the EPA's, according to NPR.

Over the next year, investigations at multiple levels of government declared that the government — of the city, the state of Michigan, and that of the United States — had failed the people of Flint and were ultimately responsible, according to the official report from the Michigan Department of Environmental Quality. Lawsuits against corporations and individuals were leveled, and it began to seem like justice might be on the horizon. But even assigning blame hasn't solved the real problem: the people of Flint still can't drink their water.

A court filing that appeared on Monday hopes to change that: the city of Flint is expected to replace 18,000 water lines — an $87 million project — by 2020, according to CBS News. This comes as a settlement in response to a lawsuit against the city regarding the water crisis, and will be presented to a federal judge in Detroit on Tuesday, according to TIME.

Even if the project is completed by 2020, that still means there are years without clean water yet ahead for the residents of Flint. So too must they continue to face the known — and as-yet unknown — consequences of that contamination. The CDC has linked the contaminated water supply in Flint to both increased lead poisoning in the city's children, and an outbreak of Legionnaire's Disease, the latter of which killed 12 people in 2014 and 2015, according to Michigan Live.