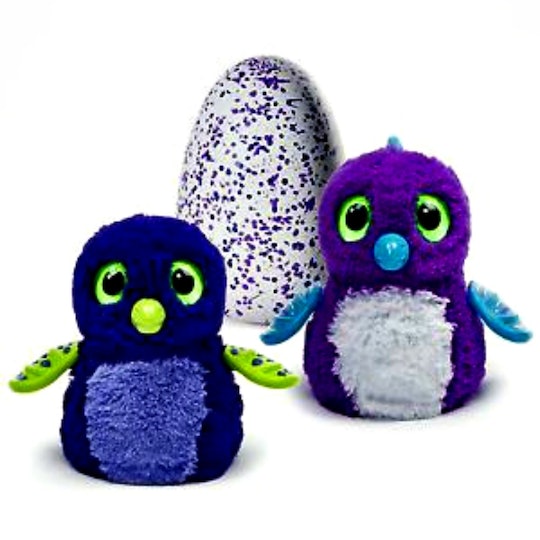 If you have a child, you've likely been on the Hatchimal hunt all holiday season. And if you're a parent? We feel your pain. With just a few days left before Santa comes down the chimney (or you exchange Hanukkah gifts or whatever it is that you do), there is not a lot of time left to get one. Keeping track of when Hatchimals go on sale online again at this point might be a little useless. If, for some crazy reason you have an extra $800 lying around, you can order one on eBay and get it expressly shipped. But most retailers who are selling them closer to the suggested retail price won't have any online until after the holiday.

Toys "R" Us doesn't have any online until Dec. 28; Target makes no promise that it will still have any in stock, even with new shipments (given how popular they are); and Walmart only has them from third party sellers who want around $150 for them. I hate to break it to you: If you're reading this, it's probably too late to get a Hatchimal online for a reasonable price. Because really, not to sound like a grinch, but $800 is not reasonable, no matter how much you love your kid.

Then again, no one wants to look at disappointed faces over a hatching toy. One pro-tip? Troll the web. There are a few places you might be able to find one.

Check out Craigslist in your area and see if anyone has been buying multiples to sell them online. The people that made it hard to get a Hatchimal in the first place could end up having your back in a pinch.

Another way to go about is to troll Twitter accounts that sell them, much like you can buy tickets online for coveted concerts like Beyoncé when they sell out. You can also sign up at HatchimalsLocator.com and other websites that will send you email and Facebook notifications when a Hatchimal goes on sale. But remember: It's going to be hard to find one in stock that doesn't cost the same amount as a car payment.

Be careful if you go through Craigslist, Twitter, or other routes that aren't backed by an actual retailer. Online Hatchimal scammers are out there ready to take advantage of a panicked parent armed with a credit card. That's what happened to one dad in Ireland, where the toy is equally as popular, who then ended up flying all the way to Spain to get his hands on another one for his kids.

Which is, again, totally insane. But so is the desire to please our little ones around the holidays, so if you need to hop a flight to wait outside of a Target halfway across the country, do you. Because at this point? That might be the quickest way to get one before the big day. Good luck out there, parents.