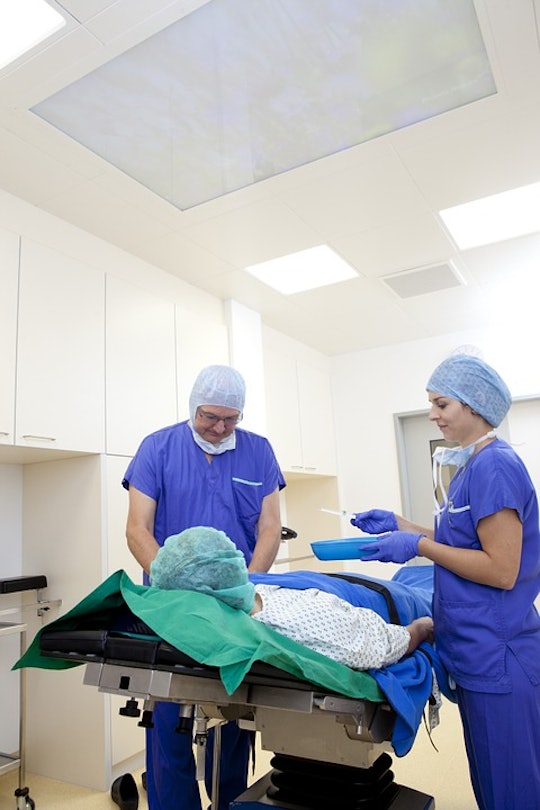 When Will I Need A C-Section? The Reasons May Vary

The more I learned about birth plans, the less I wanted anything to do with one. Early on, I made the decision that my plan was no plan. Meaning I wasn't going to make decisions about things such as epidurals until I was in the moment, rather than yoke myself to one ride or die agenda. This meant relinquishing control and trusting myself to judge what was right on a need to know basis. The only thing I did want to discuss with my doctor ahead of time was, when will I need a C-section, because I knew that this could be a possibility.

Since every doctor or OB practice has differing policies and preferences about delivering via Cesarean, I needed to know exactly where my practitioners stood on the subject. Having this knowledge gave me an understanding of which conditions would lead my doctor and I out of the delivery room and into the operating room. But it's not always the doctor or midwife's call, there are medical reasons that C-section births happen, whether they are planned or an emergency. It's always good to know what may happen in the course of your pregnancy and delivery that could lead you to having a C.

According to the website for the March Of Dimes, when it comes to having your baby by C-section, the reasons fall into two categories: pregnancy complications (non-emergency) and complications during labor and delivery (emergency). The most common reason for a pregnant woman to have a C-section birth, however, is because she has previously delivered that way. As Fit Pregnancy magazine pointed out, 45 percent of woman repeat a C-section delivery versus the 33 percent who have vaginal birth after Cesarean (VBAC).

As the website for the Centers For Disease Control and Prevention reported, this method is used to deliver one in every five babies that are born, so if you're pregnant, you'll want to see what criteria may lead to you having a C-section. Unless there are unexpected complications toward the end of your pregnancy, most C-sections take place at or after 39 weeks gestations, according to Healthline. So which complications separate a planned C-section from an emergency? Let's look at a list of reasons for each situation.

According to What To Expect's website, it's likely your doctor will know you need a C-section well before you make it to the delivery room, since certain factors in your pregnancy will tip her off. The following are reasons you'll need to have a Cesarean delivery.

When complications with either the mother or the baby pop up during the labor and delivery, it could mean an emergency C-section, according to the website for Kid's Health. Any of the following could be reasons a last minute cesarean is needed.

As much as you want to plan and be in control of something as important as the delivery of your baby, sometimes circumstances are out of your hands. My Cesarean happened when my labor stopped progressing due to the extra large noggin on my first son, making it a surprise that I didn't expect. But the most important thing was, when everything was said and done, I had a healthy baby in my arms.

If you're wondering whether or not you'll have a scheduled or emergency C-section, keep in mind the risk factors that could lead you down that road. And be comforted in knowing, that no matter which way your baby comes into the world, it's all equally meaningful and full of love.