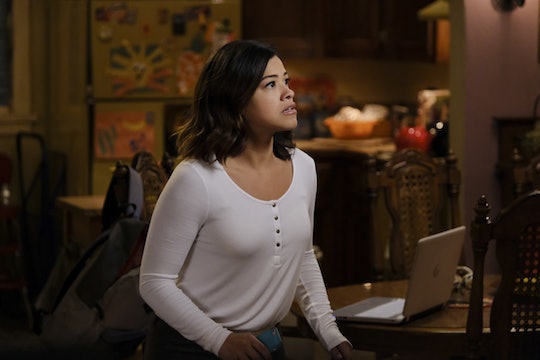 The third season of Jane the Virgin was one fans will never forget. However for those who haven't gotten the chance to see it yet, you'll probably want to catch up. So when will Jane the Virgin Season 3 be on Netflix? Thankfully, fans won't have to wait long.

Thanks to The CW's deal with Netflix, the popular telenovela comedy will be available on the streaming site just eight days after the finale airs on Monday, May 22. This means that fans can begin their binge watch as early as Tuesday, May 30. But if you plan to binge, just make sure to have your tissues nearby. (Warning: Season 3 spoilers ahead!)

The third season began with Jane beginning her married life with Michael in the hospital after he was shot by Rose. Though he seemingly recovered, in the end, the gunshot wound eventually proved to be fatal, leaving Jane and fans devastated. After Michael's death, the show jumped forward three years and many fans are still getting used to this new post-Michael era of Jane the Virgin.

During the three year time jump, Rafael went to prison for two years and when he was released, he became "zen Rafael," which thankfully didn't last too long. While he was away, Jane and Petra actually bonded, relying on each other while the father of their children was serving his sentence.

Meanwhile, Xo and Rogelio stopped talking because of Rogelio's reality show (though they've now made up and are back together); Alba was crushing hard on her boss whom she is now currently dating; and Mateo went from being "Mr. Sweet Face" to "Mr. Temper Tantrum" for a little while there, just to keep mom life interesting. Oh, and Scott was also murdered. Yeah, a lot went down in those three years and fans still aren't really sure who killed Scott, however, the truth will (probably) be revealed in the season finale.

The whole third season was a bit of roller coaster ride, which shouldn't be surprising since — as the narrator consistently reminds us — this is a telenovela after all. Still, many fans may have forgotten all that went down this season, especially with the time jump. So even if you did see Season 3, you may want to rewatch it just to pick up on anything you might have missed the first time around. You can skip over Michael's death though if it's still too soon. No one would blame you.

Whether you watch it for the first time or just want to see it all over again, you can find Jane the Virgin Season 3 on Netflix fairly soon. Until then, the season finale will air on Monday, May 22 at 9 p.m. ET on The CW.