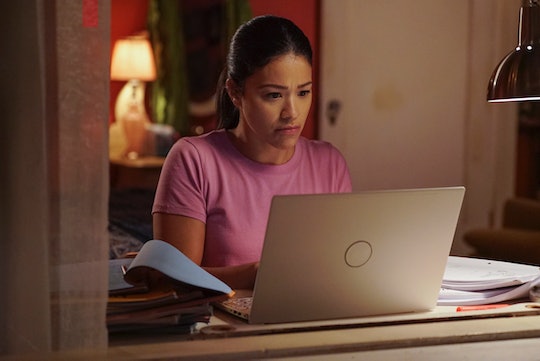 A series with never-ending twists and turns is sometimes best to watch all at once. So, whether you are up-to-date on the happenings in the Villanueva household or not, you are probably wondering — when will Jane The Virgin Season 5 be on Netflix? The end of Jane's story is coming soon, and there's nothing more satisfying for TV fans than watching a series beginning to end with no commercials.

The show is in the middle of its final season right now. For US fans, that means if you are caught up and want new episodes, you need to tune in to the CW Wednesdays at 9 p.m. ET (Some international fans can log on to Netflix weekly for the most recent episode.) But don't be too upset. Jane The Virgin Season 5 is coming to Netflix in its entirety soon. I can even predict a date for you.

Since 2016, Netflix has had a licensing deal with the CW that allows the streaming platform to release the most recent season of all series eight days after the finale airs. The networks have followed that schedule pretty consistently, so I can do a little bit of math and make a very educated guess on the release date. According to IMDb, the series finale airs July 31 on the CW. If Netflix sticks to its schedule, that will mean you can begin streaming Season 5 of the series on Thursday, Aug. 8. Can I get a whoop whoop?

If you watch the show you know that a day can actually be pretty life-changing. On a recent episode, Jane went to Montana to try and rekindle a romantic spark with her formally dead husband Michael who had just recently recovered from a case of amnesia that had caused him to become a rancher named Jason who forgot his wife entirely. While there, she realized that in the five years that Michael was out of her life she had fallen in love with Rafael, Mateo's dad and her most recent ex (who was very nearly her fiancé).

It's a telenovela so it's complicated. But Jane's realization isn't exactly a huge spoiler — it's only the middle of the season and a lot can happen. For example, Jane made the choice between the two (again), but she hasn't won Rafael back yet. So, don't throw rose petals in the air for Jane and Rafael (Jafael? Rane?) just yet. However it might be time to say a final — for real this time — goodbye to Michael.

Jane The Virgin creator Jennie Snyder Urman recently told TV Guide that she's known Jane was going to choose Rafael for a very long time. "...I knew that ultimately we were going to be bringing Jane and Rafael together, but I knew that it wasn't going to be a straight path there," she said.

It's refreshing that the show isn't going to end with Jane having complete control over everything. That's life, right? For Jane, accepting uncertainty is growth. Whether she gets the man she wants or not, I'm looking forward to streaming her complete journey on Netflix this summer.