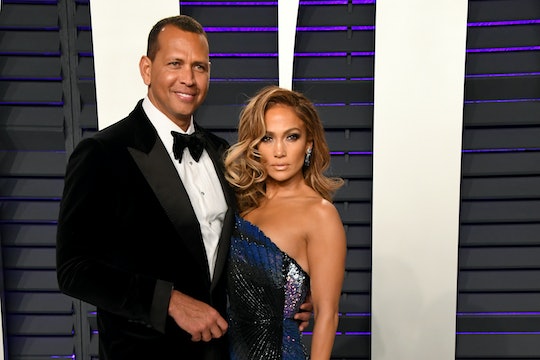 They've been engaged for almost a year now, but Jennifer Lopez and Alex Roriguez haven't revealed wedding plans. Both of them have incredibly busy schedules and, TBH, there's something to be said about enjoying a nice, long engagement.

More Like This
15 Of Jennifer Lopez’s Best Motherhood Quotes
Ben Affleck Shared A Cute Halloween Photo With Jennifer Garner & Their Kids On Instagram
Queen Elizabeth Has Given Her Royal Approval For A New Line Of Beer
Exclusive: Teen Artist Tyler Gordon Reveals The “Ultimate Hero” He Wants To Paint

As she's been been busy preparing for her big halftime performance at Super Bowl LIV in Miami, Florida this Sunday, it's likely that Lopez has taken a bit of a break from wedding planning. Rodriguez, of course, will be cheering on his fiancé from the sidelines at the show.

While a wedding date still appears to be TBD, the couple has been open about the fact that they are indeed planning their wedding — on their own terms. After all, they had their engagement party in September — six months after they got engaged. In April, Lopez revealed during an appearance on WKTU's Cubby & Carolina In The Morning radio show that wedding planning was in the early stages. "We haven't decided if we're going to squeeze it in somewhere, or gonna wait, 'cause I really don't know yet," she said.

A few months later, in September, Rodriguez shared on Good Morning America that they had been doing more wedding planning, but wasn't eager to reveal too many more details. "When you think about wedding plans and Jennifer is your partner all you do is — you do a lot of nodding," he joked. "I don't know where the location is, I don't know what I'm wearing, I don't know when it is. I'll just show up." He did say that their wedding is a long flight away, so it will presumably be a destination wedding. How fun!

But Lopez was quick to shut down any rumors about their wedding location (even if her fiancé started those rumors). That same month, she told Entertainment Tonight that they are still in the early stages of wedding planning. "He's just saying things," she said. "We're talking about it, but we don't have any firm plans...and we're talking about a lot of places, but I don't know yet." She also admitted that they don't even know what time of year they want to get married. "We can't narrow it down, yet," she said.

The couple have a bit more time to go until they can relax and really focus on wedding planning. The end of award show season is in early February and the start of baseball season (where Rodriguez serves as a TV commentator) is in late March. And who knows, maybe they will set a wedding date during this time. But it doesn't seem like they are in any rush to get married right now are clearly enjoying their lives together as fiancée and fiancé.