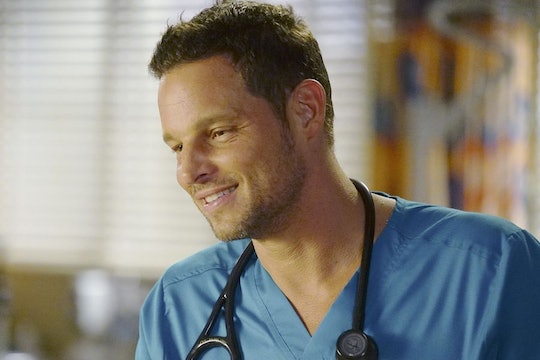 Justin Chambers May Be Scrubbing Out Of 'Grey's

After the midseason premiere of Grey's Anatomy last week, fans are in a fit. According to Dr. Bailey, Alex accepted the plea deal, which means he's heading to prison. If that's true when will Justin Chambers leave Grey's Anatomy? The good news is that he'll probably be sticking around for at least the rest of the season. Ever since the charges against Alex were bumped up to felony, fans have been worried for what that meant for Chambers' role on the show. A lot of characters have come and gone from Grey Sloan Memorial Hospital (remember when it was Seattle Grace?), but Alex has been there from the very beginning. If Chambers is leaving, it'll be devastating to see him go.

If Alex did accept the plea deal, he's going away for at least two years, which could mean Chambers leaves the show for two whole seasons, unless there's another time jump, which could very well happen. The series skipped ahead quite a bit after Derek's death. Alternatively, if he didn't actually accept the plea deal and ends up going to trial and loses, he could be facing 30 years to life. Based on that, I'd assume Chambers would be leaving the show for good and I just can't imagine Shonda Rhimes would do that to such a beloved character. Alex can't be written off the show this way, not after all the growth he's gone through over the past 13 seasons.

There's also the popular third option, which is Alex somehow escapes with no jail time at all, meaning Chambers isn't going anywhere. Fans have begun to theorize that DeLuca will save the day by dropping the charges against Alex, but so far there's been no evidence to support this theory. For now, it definitely looks like Alex is going to jail — it's just a matter of for how long. Whatever his sentence ends up being, he'll probably have some time before he actually goes to prison. (The show could drag any type of trail out until the end of the season.) That's is why I suspect Chambers will be sticking around at least until Season 13 comes to a close.

After that though, anything is possible. I truly hope Chambers is sticking around, but I've also watched Grey's Anatomy long enough to know not to get my hopes up.

You can find out what Alex's fate is by watching Grey's Anatomy on Thursdays at 8 p.m. ET on ABC.