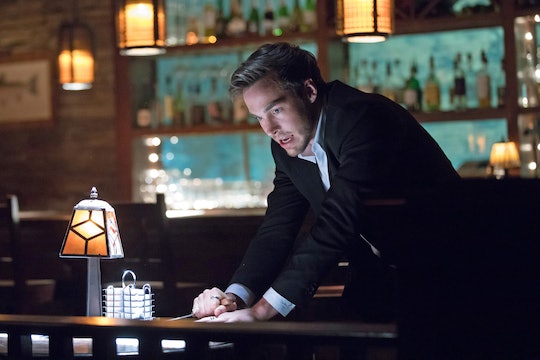 Elena's Return Is Coming On 'The Vampire Diaries'

The Vampire Diaries gave us the first truly great twist of Season 8 at the end of last Friday's episode. In the closing moments of the hour, Chris Wood returned as the previously-dead Kai. Season 6's major villain casually strolled in while Damon and Alaric were discussing how to kill Cade and offered his devil-killing services to them. But Kai's visit from hell isn't just relevant to the Cade storyline — his appearance is sure to tie into Nina Dobrev's return this season. But exactly when will Kai bring Elena back on The Vampire Diaries?

Though the formerly-hellbound Kai didn't actually mention Elena when he first showed up, the topic of Damon's girlfriend came up in the promo for the upcoming installment. On "The Lies Are Going to Catch Up with You," Kai is set to bargain with Alaric and Damon after Alaric — obviously still sore over the whole Kai-killed-his-pregnant-wife thing — moves to kill the former witch-vampire hybrid when he declines Kai's help in killing Cade. He offers to bring Elena back, in exchange for Damon and Alaric's help getting him out of hell permanently.

Whether or not Kai actually can do that remains to be seen. When he first put Elena under his sleeping curse, he was very clear that she would only awaken when Bonnie died. Any tampering with the curse or attempts to find loopholes would kill Elena immediately. Kai may be saying that he can resurrect Elena (presumably without killing Bonnie), but it's possible that he's just lying in order to stop Alaric from killing him.

But whether Kai resurrects her or not, one thing is certain — Elena is coming back to the show. Dobrev confirmed that she would be appearing in the series finale ("I Was Feeling Epic") when she posted a photo of the episode's script to Instagram on Jan. 26.

In a recently-released series finale teaser, viewers also get a glimpse of the awakened Elena. Reflected in a display case at the high school, Elena wonders what happened and asks, "Why am I here right now?"

So, at this point, it's been doubly confirmed that Dobrev is appearing in the series finale. But is she going to be in any episodes prior to that? As of yet, it doesn't appear that she will be. Dobrev only shared a photo of the one script for the series finale. Neither she nor anyone connected to the show has mentioned that she'll be coming back before then, and she's only listed on IMDB for the finale. If Kai is bringing her back, then it doesn't seem like he'll be doing it right away, since there are still three more episodes before the finale.

Of course, it's completely possible that Kai won't be the one to bring back Elena. I'm firmly convinced that he can't actually do it and his offer is bogus. My guess is that when Damon figures that out, he'll kill Kai all over again (or allow Alaric to do it this time). As we all know, there's another definite way for Elena to awaken: Bonnie's death. As much as I'm hoping Bonnie makes it out of the series alive, there's a good chance that her early death will be what actually brings Elena back prematurely.