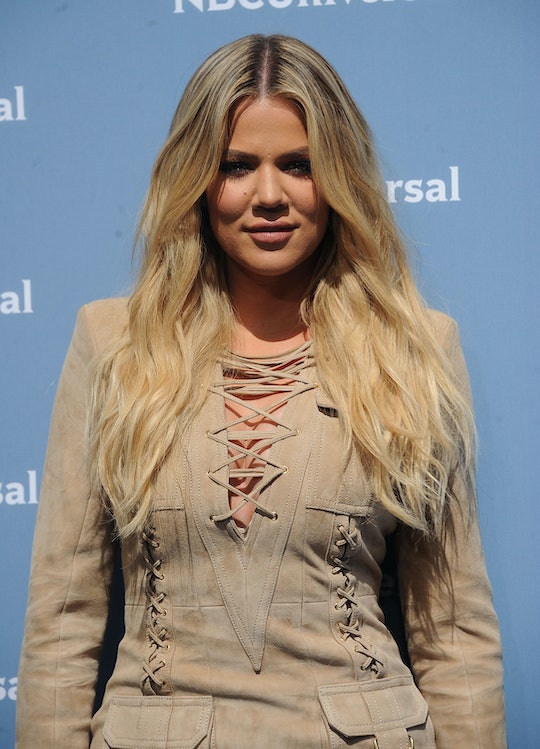 This One Big Clue Hints That Khloé K. Could Be Sharing Photos Of Her Daughter Any Day Now

As everyone who has been near the internet in the last week knows, Khloé Kardashian welcomed her baby girl, after what may have felt like the world's longest recorded pregnancy. But now that little True Thompson has entered the world, fans are clamoring for more info. Now that her daughter's name has finally been revealed, many are likely wondering when Khloé Kardashian will share photos of baby True. No official word yet, but don't stress. It's the Kardashians, after all. It's not going to be very long.

Kardashian, age 33, gave birth to her first child with NBA player Tristan Thompson on Thursday, April 12, in Cleveland, and on Monday, she posted an Instagram announcing her daughter's name, True Thompson, writing, "Our little girl, True Thompson, has completely stolen our hearts and we are overwhelmed with LOVE. Such a blessing to welcome this angel into the family! Mommy and Daddy loooooove you True!" But the accompanying photo didn't do much to satiate anyone hoping for a cute baby picture — it simply showed a whole bunch of pink balloons, along with some toys and flowers to celebrate the birth.

However, another social media post from a member of the reality show family on Monday seemed to hint that fans could be getting a glimpse of little True sooner rather than later.

Kardashian matriarch Kris Jenner posted a pink balloon photo of her own on Monday afternoon, in which she explained the meaning behind True's name. (No, it's apparently not a subtle dig at Tristan Thompson, after the Daily Mail published footage that purported to show Thompson allegedly cheating on Khloé the same week she gave birth to True. Neither Thompson nor Kardashian's reps immediately responded to Romper's request for comment about the cheating allegations.)

And then, after a few hashtags about family tradition and such, Jenner tagged @true. Could it be? Could this newborn baby already have an Instagram account?

It seems like it, although as of right now, the account is totally empty, lacking even a profile picture. But the "True Thompson" Instagram account that Jenner linked to already has over 96,000 followers, and is sure to get a lot more, which means it might be the perfect place to drop a baby photo sometime soon.

Plenty members of the Kardashian-Jenner clan have been having babies recently, and in general, none of them have waited too long to grant the world some pictures. True, Kylie Jenner did go her entire pregnancy without confirming it, or letting any bump photos see the light of day, but once she gave birth to Stormi on Feb. 1, she only waited one more month to post the first full photo of Stormi's face. Meanwhile, sister Kim Kardashian also waited about a month after the birth to post a picture of her third child, Chicago West, on Instagram.

Perhaps Khloé too will decide that the one-month rule is a good one to follow. After all, if you're a Kardashian, you don't want to dump all the information on your fans at once. (If you do, heads might explode.) Really, a month seems neither too short, nor too long.

Or, who knows, maybe Khloé will go rogue. Maybe she'll drop some adorable pictures of newborn True tomorrow, and dominate the news cycle once again. Maybe, she'll decide that, actually, she's had it with fame, and take to the woods! (Probably not, though.)

I'm not a betting lady but, if I were, I'd put down money on fans getting their much-anticipated photo sometime in the next few weeks.

More Like This
Kim Kardashian Now Owns A Piece Of Jewelry From Princess Diana's Collection
Khloé Kardashian Promises Tristan Thompson's Late Mom Her Boys Will Be "OK"
Sally Field Is The Ultimate Cool Mom Who Once Tried To Set Her Son Up With An Olympian
Marie Kondo Gives Up Tidying Post-Kids, Sparking Joy For Moms Everywhere
What Parents Are Talking About — Delivered Straight To Your Inbox