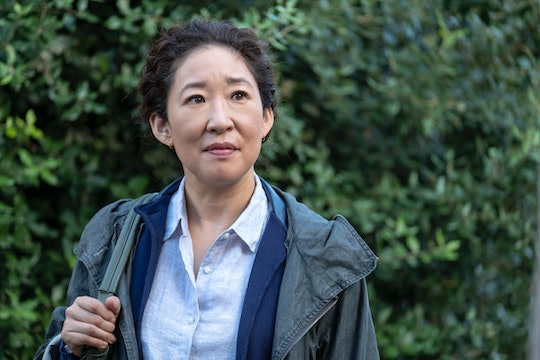 'Killing Eve' Season 2 Will Be Worth The Wait

Killing Eve first aired in the States on BBC America, but it gained a wider audience once it made the shift to Hulu. The second season is set to premiere on AMC on Apr. 7, but fans who prefer to stream might be eager for its Hulu debut. So when will Killing Eve Season 2 be on Hulu?

That's a difficult call to make because neither the network nor the streaming service have made an announcement about it. Since the show was so popular on Hulu, it's likely that it will migrate there eventually, but just how quickly is up for some debate. It all depends on the details of the deal struck between Hulu and AMC, which aren't readily available for public consumption. Sometimes new episodes of a show will be on Hulu a day or two after they've premiered; other times, the entire season will air before it makes the jump online. That was what happened with Killing Eve Season 1, so it seems likely that the same situation will repeat with Season 2.

That means that the second season might not be on Hulu for a couple of months. There will be eight episodes in total, so Killing Eve will likely run until late May or early June. Then it could be a matter of weeks or months before it's on Hulu.

That may be a disappointing answer for fans who are looking to catch up but don't have access to cable. But there may be other ways to watch the show if Season 2 doesn't go up on Hulu on a weekly basis. It seems like the episode may be available to stream on AMC's website after its premiere, because there's already a placeholder waiting for it. You have to enter your TV provider to sign in and view content on AMC's site, but if you can find a way to do that (cough cough, none of my business), then Killing Eve may be just a click away.

After the cliffhanger ending of Season 1, viewers are understandably hungry to find out what happens next. And star Jodie Comer was happy to give out a few spoiler-free hints while talking to Elle. "The story picks up right where we left off," she said. "Obviously Eve stabbed Villanelle, let's not forget that, but what's going to be really interesting for the audience is how Villanelle reacts to that. It may not be as they suspect it will be."

She also revealed that the "dynamics have really shifted," especially between Villanelle and Eve. They were unexpectedly brought closer at the end of Season 1 and that will have a big impact on the second season. It sounds like the show will continue to upend genre expectations in the coming episodes. And while that might be exciting enough to make you absolutely desperate for Season 2, just try to remind yourself that Killing Eve isn't going anywhere. If may take a little longer for it to show up on the service you prefer, but it'll be worth the wait.