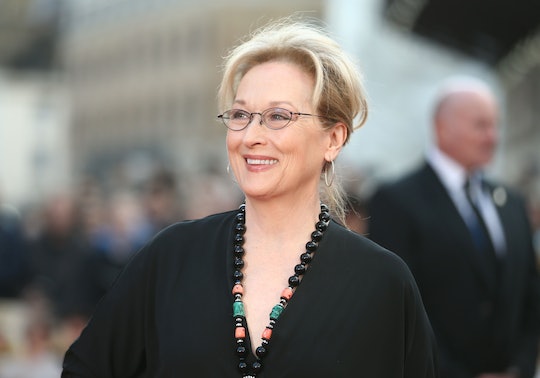 When Will Meryl Streep & J.J. Abrams' 'The Nix' Debut? They Are Teaming Up For A New Show

Meryl Streep is one of the greatest actresses of any generation. She's the single most-nominated actress in history, when it comes to the Academy Awards, and her work consistently deserves that recognition. Similarly, J.J. Abrams is one of the most successful and prolific writer/director/producers working today in both television and film. It seems that everything he touches is basically guaranteed to turn to Hollywood gold. Now, the two powerhouses are coming together for an adaptation of a critically-acclaimed novel. But when will Meryl Streep and J.J. Abrams' The Nix debut?

The Nix was one of the most buzzed-about novels heading into fall. The book is the "whirling debut novel" from author Nathan Hill and was described by Eliot Schrefer, in a review of the novel for USA Today, as "the debut of an important new writer." Unsurprisingly, the generation-spanning satirical/comic story – about a hippie-era mother recently cast into the spotlight and her aspiring-novelist estranged son who capitalizes on that unexpected fame with a scathing profile of his mother, in order to get out of debt – was a hot commodity when it came time to auction off the adaptation rights after the book's August 30 release.

According to Deadline, Creative Artists Agency (CAA) brokered the auction for the rights. Warner Bros Television landed the deal and is currently closing it, with Meryl Streep attached to star and JJ Abrams producing via his company, Bad Robot. Abrams is also expected to direct some of the episodes, taking a more hands-on approach to this property. The show doesn't yet have a premiere date, or even a network to air on, since the deal is in its infancy. Any number of things can change, given that the project is just starting out, but fingers crossed that Abrams remains attached to direct and Streep remains attached to star.

The role of the "hippie-era mother who gets national press exposure for throwing rocks at a conservative governor on the presidential campaign trail" sounds like a phenomenal one for Streep, who has proven her comedic acting chops are just as strong as her dramatic roles time and again. Streep is just off of a leading role in the biographical comedy-drama Florence Foster Jenkins, for which she's already receiving awards buzz. Abrams' Star Wars: The Force Awakens debuted to massive success late last year, but it's no surprise that he's up for a return to television, where he got his earliest buzz as a creator, writer, and director for huge hits like Felicity, Alias, and Lost. He's also an executive producer for one of the most hotly-anticipated shows of the fall, HBO's star-studded Westworld.

It's more noteworthy that Streep is making the jump to TV. While Streep has appeared in television roles in the past, she's always focused more on film – her last major TV gig was Angels of America back in 2003, for which she won lead actress in a mini-series Golden Globe and Emmy awards. Naturally. I can already see the piles and piles of future awards for The Nix forming.