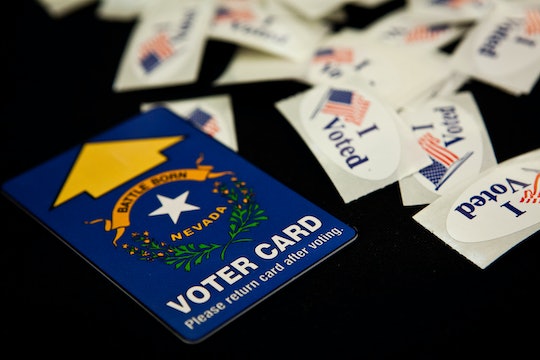 When Will Nevada's Election Results Be In? The State Is An Important Battleground

While every vote matters in an election as contentious and high-stakes at this year's showdown between Democratic presidential nominee Hillary Clinton and Republican presidential nominee Donald Trump, the fact remains that the results coming from some states will be watched a little more closely than others. Unlike most states, which usually lean heavily towards one party over the other, the handful of so-called swing states are pretty much evenly divided between Democrats and Republicans, and as a result, can have a huge impact on the outcome of the election. One of those highly-contested states? Nevada. When will Nevada's election results be in? According to Rock The Vote, polls in Nevada close at 7 p.m. Pacific Time, and everyone in line by that time must be allowed to vote. While accurate poll results aren't entirely available immediately, it doesn't take long to project a winner — particularly given that polls in other time zones will have already closed, and their information will have already come in.

Although we'll have to wait to see what happens for sure in Nevada, here's what is already known. Firstly, it's a really tight race: according to CNN, as of Oct. 10, Clinton had a slight lead over Trump with 46 percent of voters saying they'd vote for Clinton, versus Trump's 44 percent. Since then, the news of a new investigation into emails sent by Clinton aide Huma Abedin has captured public attention, but according to The Huffington Post, so far it doesn't appear to be doing much harm to Clinton in Nevada. In fact, voter turnout among Democrats increased over the weekend, and Clinton is still projected to lead Trump — though, polls are still close enough in Nevada that either candidate could win.

That's significant because winning Nevada is going to be important to both candidates, albeit for different reasons. According to The Huffington Post, a win in Nevada for Clinton means that, assuming all the non-swing states vote as expected, she could win the election without winning in the remainder of the swing states (Florida, North Carolina, Ohio, Iowa, Arizona, Georgia). For Trump, however, a win in Nevada is necessary if he is to win the election, according to Fortune.

And that could be hard. Although Nevada has tended to vote Republican, Obama took Nevada in the last election (as did Bill Clinton in 1996), according to The Telegraph. Furthermore, The Washington Post noted that "voters in Nevada have picked the winning candidate in 10 election cycles since 1972," which could be bad news for Trump if reports of a divided Nevada electorate translate into polls on Election Day. According to Fortune, "Trump’s hardline position on immigration has turned off many in the state’s large Hispanic population," which should concern him if he can't afford to lose in that state. And there's no question that Hispanic voters are taking this election seriously. As University of Florida political science professor Daniel A. Smith told The New York Times, “Hispanics are outperforming. They are more engaged in this election cycle, and more are voting earlier than we saw in 2012.”

Some in Nevada have already called the state as a slam-dunk for Clinton, though. Jon Ralston, a reporter at Nevada news station KTNV, argued that, analyzing early-voting patterns and voter registration, it would be almost impossible for Trump to take the state:

If you assume he and Hillary Clinton get 90 percent of their bases (and almost no poll shows Trump doing that well), and she loses indies by 20 points (and most here show her up with [independents]) she STILL wins the state by 2 points.

Let's suppose Republicans end up coalescing and [Trump] gets 90 percent and she gets only 80 percent of Democrats — a highly unlikely scenario, to put it mildly —he would still need to win indies by at least 10 points to win the state.

That is what the nearly 90,000-voter registration edge does for the Democrats in Nevada — if they have their usual turnout, it's almost impossible for Trump to win.

The Trump campaign, however, disagrees. According to Fortune, Republican National Committee political director Chris Carr said he's happy with how Trump is performing in Nevada, and explained, “we’re seeing some very positive metrics. I would say we’re running at parity or ahead of the Clinton campaign.”

Of course, until all votes are cast and counted, any predictions are still speculation, and Nevada is still a swing state with close polls. If nothing else, the varied reports over the outcome of Nevada are yet another example of how high-stakes this election is, and that there are probably few outcomes that would be truly surprising at this point. And that's why we'll likely all be glued to our screens the night of Nov. 8 to find out exactly how the country voted.