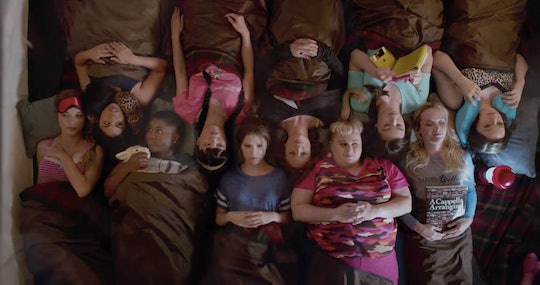 When Will 'Pitch Perfect 3' Come Out? The Premiere Date Was Just Moved Up

Aca-mazing! Not only are we getting another Pitch Perfect installment, we’re getting it sooner than expected. Universal Pictures announced Monday that it moved up the premiere date for Pitch Perfect 3 by two weeks to July 21, 2017. This is actually the original release date for the blockbuster series’ next film before it was pushed back to Aug. 4. But now, Pitch Perfect 3 is coming out end of July 2017 and I am aca-psyched.

The quirky musical comedy series about an all-female collegiate acapella group has shattered industry stereotypes to become one of the most successful series without vampires or superheroes that is not set in a dystopian future (Twilight, Marvel, and Hunger Games, I’m looking at you). Pitch Perfect 3 will undoubtedly answer the question: What do famous collegiate acapella students do after graduation (work on a Disney cruise line?).

While Pitch Perfect 3 plot details haven’t been officially released yet, there have been rumors that Hailee Steinfeld’s character Emily Junk, a welcome addition to the PP2 cast, will be leading a brand new band of Barden Bellas, so fans should expect plenty of fresh faces. Aca-excuse me?

Never fear, all your favorite Bellas are still coming back! Cast members Anna Kendrick, Brittany Snow, Rebel Wilson, and Hailee Steinfeld are all slated to return as stars. Elizabeth Banks will be in the director’s chair again (and the judges chair, we hope) after helming the smash sequel last year and writer Kay Cannon will be back adding some of that signature Pitch Perfect wit to the screenplay. Fans should prepare for the same hilarious, musical aca-fun as the first two rounds.

Pitch Perfect has become a phenomenon since its female-drive story and amazing soundtracks penetrated our hearts in 2012.

Though Pitch Perfect O.G. wasn’t a huge hit in theaters, home video sales of the original raked in $103 million as its charm grew on audiences thanks to word of mouth and the release of Anna Kendrick’s “When I’m Gone” (aka that awesome “cup song”). Then in May 2015, Pitch Perfect 2’s box office performance stunned film industry analysts after it opened with $70.3 million. It went on to earn more that $286 million internationally during its run in theaters so, naturally, a sequel was greenlit right away.

Nick Carpou, Universal Pictures’ president of domestic distribution, credits the film’s women-centric story for its success. “It starts with young female appeal, generally, and then expands beyond that thanks to careful marketing and publicity.”

Basically, the endearing and feisty Bellas struck a chord (get it?) with teenage girls and everyone else jumped on board. Have you seen that Inside Amy Schumer sketch about men secretly watching Pitch Perfect? It’s like that.

Pitch Perfect 3 will undoubtedly answer the question: What do famous collegiate acapella students do after graduation (join a Disney cruise line?). Rebel Wilson, who plays Fat Amy in the series, told THR her own vision for the new film. “All the Bellas are together becoming a legit singing group out of college,” the Aussie comedian said, adding, “I also think a Fat Amy origins story would be awesome.” So would we, Rebel. So would we.

Screenwriter Cannon explained her reasons for signing on to write the third Pitch Perfect movie to The Hollywood Reporter during the Pitch Perfect 2 premiere, saying, “I don’t want to give over my baby to someone else.” We don't blame her.

The last Pitch Perfect installment had crazy cameos. Everyone from Snoop Dogg, to Jimmy Kimmel and Shonda Rhimes, to the Green Bay Packers appeared. Plus, there was that aca-awesome clip of FLOTUS and POTUS (Barack and Michelle Obama, if you don’t know them personally) watching the Bellas perform. So get ready for even more hilarious celebrity appearances in Pitch Perfect 3.

Cannon dished on her dream Pitch Perfect 3 cameo. “I would love to see Tracy Morgan in it,” she said. “Not only because I think he’s hilarious, but I miss him and want to see him perform again.” Cannon worked as a writer on 30 Rock which starred Morgan in one of the leading roles (Morgan is currently recovering from a traumatic brain injury after a 2014 car crash).

Personally, I think the former-SNL star would be aca-wonderful as a retired music producer (think Tracy Jordan meets Quincy Jones) the Bellas track down to produce their new album. I’m just putting that idea out there (psst… call me for details, Kate!)

On The Ellen DeGeneres Show last November, Wilson revealed production on Pitch Perfect 3 would kickoff in the first few months of 2016, so we should be getting more details soon. Steinfeld addressed the upcoming film in an interview with MTV News and her words captured Pitch Perfect fans’ feelings about the sequel perfectly: “I can’t wait! It’s all happening!” Aca-exciting.