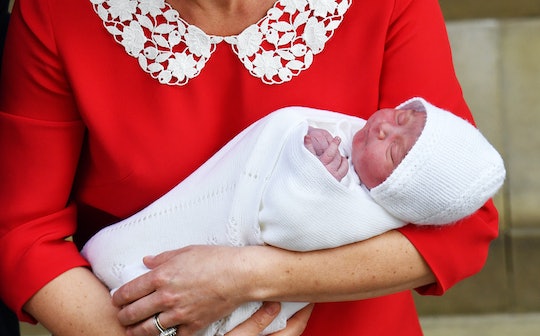 One characteristic of the royal family, that I'm sure many people appreciate, is that they're extremely predicable. Once they do things a certain way, they almost always follow through in a similar pattern in the future. And when it comes to the fanfare surrounding the arrival of Prince William and Kate Middleton's children, fans have their traditions pretty much down to a science. And the timing of the Duke and Duchess of Cambridge releasing the first portrait of the royal babies is no exception. So, when will Prince Louis' first portrait be released? Chances are, you won't be waiting too much longer.

To be fair, the world has already caught its first glimpse of the newest royal baby. Just seven hours after Prince Louis was born on April 23, Prince William and Middleton stepped out with their baby boy to introduce him on the steps of St. Mary's Hospital in London, as People reported. Middleton wore a red dress — which many speculated was a subtle nod to the late Princess Diana, as Glamour reported — and Prince Louis was wrapped in a delicate white shawl for the grand reveal. Although the Duke and Duchess of Cambridge didn't linger very long outside of the private Lindo Wing, plenty of photos of the new prince were captured from every angle.

Just look at that sweet, scrunched-up face! And those tiny fingers!

Another royal baby "tradition" for the Duke and Duchess of Cambridge is introducing their newest additions very soon after their arrival — and then high-tailing it back to Kensington Palace. Media outlets got another quick look at the newest royal baby number when the proud parents re-emerged from the hospital with Prince Louis in a car seat, as The Telegraph reported. At that point, the world was able to have an even better idea of what the little prince looked like. (Is it weird that I have an overwhelming urge to kiss his cheeks?)

So yeah, it's pretty much confirmed: Prince Louis is totally adorable. But that certainly doesn't cancel out the hype surrounding the anticipation of his first official royal portrait. Not by a long shot. And now we wait...

But really, I'll go ahead and save you some angst. Because, as OK! Magazine reported, if the past is any indication of what Prince William and Middleton will do this time around, Louis' first portrait will be released roughly a month after his arrival. So we should expect to see the newest royal baby's sweet face again sometime near the end of May, in all likelihood.

Let's take a walk down memory lane, shall we? Vanity Fair reported that Prince George's first portrait was released on Aug. 19, 2013. The shot featured the new parents beaming while Middleton cradles her son alongside their two dogs. Since Prince George was born on July 23, 2013, that means the photo was released just a few days shy of his one-month "birthday."

Likewise, Princess Charlotte was born on May 2, 2015, and just a few days after she was 1 month old, the royal family released her first portrait on June 6. The adorable photo — which shows big brother Prince George holding his baby sister — was actually taken by Middleton, the Daily Mail reported. OMG, it was double the royal cuteness!

Of course, OK! Magazine also speculated the duke and duchess could potentially use Princess Charlotte's third birthday on May 2 to release photos of the new prince earlier than expected. And if that's the case, then Prince Louis' first portrait could be hitting the inter-webs in a matter of days. But would they really want to steal her birthday thunder? I'm not so sure. What I am sure about is this: It would be too cute to handle if all three royal children were photographed together for the occasion. (Make this happen, Kate! Please and thank you.)