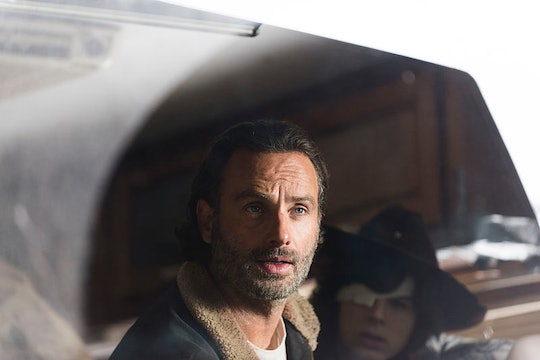 When Will Rick Kill Negan On 'The Walking Dead'? This Season 7 Villain Is Here To Stay

Many fans of The Walking Dead wouldn't be sad to see Negan go. Though he has his share of fans who are drawn to his charisma and showboat violence, there's a portion of the audience who find his bravado a lot less charming. It doesn't help that his first major episode was basically an hour of watching him emotionally, physically, and mentally torture every character who crossed his path. Negan has done enough in his brief appearances to warrant his death at Rick's hands, but when will Rick kill Negan on The Walking Dead?

If you're one of the people clamoring for Negan's demise, you're not going to be happy with the answer. Though there's no guaranteeing how differently events on the show will play out as compared to the comics, the comics do provide the backbone of the series. And in the comics, Negan is defeated, but not killed. When the Saviors are finally overthrown, Rick wounds Negan with a slash across the throat, though, the wound ultimately does not kill him. Instead, Rick has Negan imprisoned in a cell for years. It's not exactly a satisfying outcome, particularly because after two years behind bars, Negan eventually escapes, which means he's still roaming free on the page.

In the Season 7 premiere, Rick promised that he would kill Negan someday, even if it doesn't end up being anytime soon. But that was before Negan kicked up the mind games a notch. After driving Rick into a zombie melee to make him play a truly messed up game of fetch-the-hatchet, Negan drove him back to the scene of the crime and demanded Rick cut off Carl's arm. Beaten down and broken, it looked like Rick was going to do it, until Negan called it off at the last second. His point was made: Rick was now entirely under his control. So, you see, Rick isn't going to kill him (at least not right now), because Rick is going to do whatever Negan wants.

That's obviously not going to last because the heroes wouldn't be heroes on this show if they didn't dust themselves off and fight back eventually. But it complicates things, and it's sure to change how Rick reacts going forward. Part of the reason this situation came about was because of Rick's decision to slaughter a house full of Saviors. Being treated to such extreme horror in return may make him rethink violence as a leadership tool; it may be why Rick ultimately allows Negan to live at all.