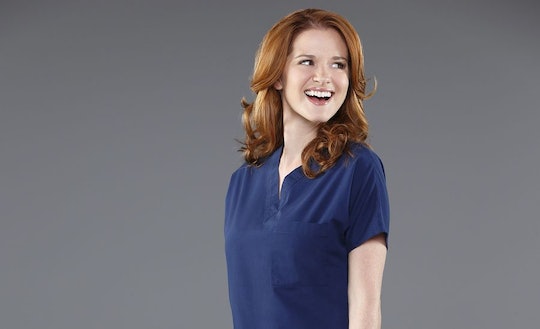 When it comes to Grey's Anatomy, fans know by now that one should never get too attached to a character. Still, that doesn't stop fans from choosing their favorites, and unfortunately, it was announced last week that two beloved leads — Sarah Drew, who plays April Kepner, and Jessica Capshaw, who plays Arizona Robbins — will be leaving the show. So when will Sarah Drew leave Grey's Anatomy? Unfortunately, her time on the series is coming to a close.

Deadline broke the shocking news on March 8, revealing that the Grey's producers chose not to renew Drew and Capshaw's contracts for the next season, thereby making Season 14 the last time they will appear on the show. So fans can expect their exit to occur at some point during the Season 14 finale. Show co-runner Krista Vernoff said in a statement, "As writers, our job is to follow the stories where they want to go and sometimes that means saying goodbye to characters we love."

Series creator Shonda Rhimes also noted in an Instagram post how influential both characters have been on the series, stating, "Both Arizona Robbins and April Kepner are not only beloved but iconic — both the LGBTQ and devout Christian communities are underrepresented on TV...They will always be a part of our Shondaland family."

Drew first joined the medical drama when she was cast in a recurring role during Season 6, back when Seattle Grace merged with Mercy West Hospital. She then became a full-time cast member in Season 7, and over the course of the nine seasons she's been on the show fans have gotten to see April grow and change as a character.

Currently April has seemed to walk away from her faith and has become more sexually active and started drinking much more heavily. Many fans are worried that this turn in April's spiraling could hint to her possibly being killed off of the show. However, hopefully that's not the case and April will be given a nice send off, but with Grey's you can never really know.

No matter how April leaves the show, fans aren't at all happy about her upcoming exit. There's already a petition on Change.org for the show to keep Drew and Capshaw; the petition currently has over 33,000 signatures. People are also saying they will be boycotting the series and the hashtag #GreysAnatomyIsOverParty even started to gain some traction. Although fans are more than upset, Drew has handled her exit with absolute grace. She took to Twitter soon after the news broke to share her brief thoughts on the matter and to thank her fans.

"I love you, and I love April, and her story isn't over yet," she wrote. "And the really good news (for me, at least) is that I'm here on set shadowing one of my favorite people, Kevin McKidd, with my beloved Greys family all this week and next, so I get to process all of my feelings surrounded by the community that has nourished and nurtured me for almost a decade. For that, I am so grateful."

Fans, of course, sent their support and promised to follow her on her next ventures. Drew can next be seen in the film Indivisible, alongside her Grey's costar Jason George. Additionally, it was also announced this week that she will be starring as Cagney in the Cagney and Lacey reboot on CBS, so she won't be off our TV screens for very long.

For now, though, there's still time before Drew departs Grey's so you can keep seeing her on Thursday nights at 8 p.m. EST on ABC.