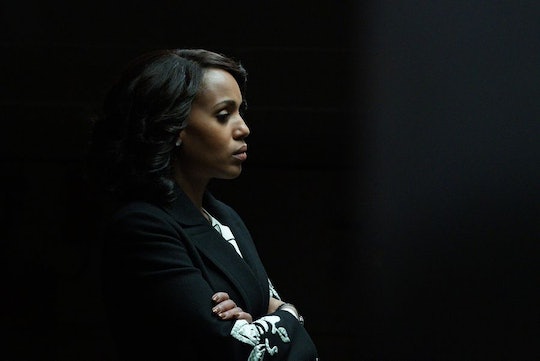 'Scandal' Season 6 Should Show Up On Netflix Soon

The sixth season of Scandal is coming to an end with an epic two-hour season finale. From the very beginning, this season was a roller coaster. It began with Frankie Vargas winning the presidency and then promptly being assassinated, leading to a wild mystery of who killed him, why, and more importantly, for who. If you missed out this season, you'll definitely want to catch up. So when will Scandal Season 6 be on Netflix? Thankfully, you probably won't have to wait too long.

According to What's On Netflix, the past three seasons of Scandal have made their way to Netflix in the month of June, with Season 5 hitting the streaming site on June 11, 2016. That means fans probably won't have to wait longer than a month before they can binge watch Season 6, which is great because even if you've already seen it, you may need to watch it again just to fully grasp all the twists and turns of the season.

Plus, now that Scandal is officially coming to an end after the seventh season, fans may want to rewatch the whole show from the very beginning to prepare for the final season. Olivia, who was already pretty badass at the start of the series, has come a long way over these six years, as has the rest of her team.

The show dropped it's very first twist at the end of the pilot episode when it was revealed Olivia had an affair with the president. The show only got more twisty with each passing week and season. Fans have now become accustomed to seeing Huck, Quinn, Charlie, and/or Jake cutting people up and torturing them with ease. Fans have watched Abby go from Olivia's right hand gladiator to the White House Press Secretary to Chief of Staff and then to the dark side.

Scandal has also introduced plenty of new characters like Jake, who made Olivia and Fitz's forbidden romance into a love triangle, and Marcus, who finally showed Mellie what it really feels like to be loved.

Besides the twists, there has also been amazing one-liners and speeches that will stick with fans for years to come. There was Abby's speech about how different it is for as a woman than it is for her boyfriend even though they work in the same field. There was pretty much every white hat speech Olivia has ever given as well as the way her father Rowan continuously dressed down Fitz and anyone else who got in his way.

If all that doesn't convince you to do a Scandal marathon, I don't know what will. The Scandal Season 6 finale airs on Thursday, May 18 at 9 p.m. ET on ABC.