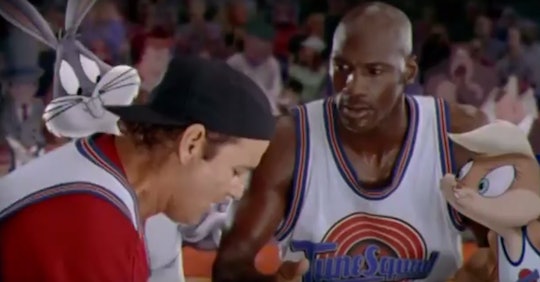 When Will 'Space Jam 2' Come Out? The Script Is In The Works

Space Jam might be one of the greatest sports films of all time. For '90s kids, it had everything: the Looney Tunes, Michael Jordan, R. Kelly's "I Believe I Can Fly", and even Bill Murray. Fans have long hoped that Bugs Bunny and Daffy Duck would hit the court together again; now, that dream may be coming true. When Will Space Jam 2 come out? According to The Hollywood Reporter, the script is in the works.

Right now, the Space Jam 2 script is in the works and expected to star Cleveland Cavaliers player LeBron James. Fast & Furious 6 producer Justin Lin appears to be taking the lead on the project's development, according to The Hollywood Reporter, and he may also serve as director and producer for the project. Lin picked up where J.J. Abrams left off to direct the 2016 installment of the Star Trek franchise, Star Trek Beyond; IMDb reported that the movie is scheduled for a July release. Lin is working with co-writers Alfredo Botello and Andrew Dodge, according to The Hollywood Reporter. Botello's IMDb writing credits include episodes of Reality Reboot and the 2015 film Hollywood Adventures. Andrew Dodge is known for writing 2013's Bad Words, the R-rated spelling bee movie starring Jason Bateman.

This isn't the first time Warner Bros. started work on a Space Jam sequel; in 1997 (the year after the m0vie's release), a producer told the studio that Jordan was up for a second movie, according to Mental Floss. A creative team mobilized to plan the second film and even created a new villain to (ideally) be played by Mel Brooks; unfortunately, the studio learned later that Jordan never agreed to a sequel, so they scrapped the project.

Even so, it seems as though Jordan had a blast working on Space Jam. To ensure Jordan would be ready for a season with the Chicago Bulls after filming, Warner Bros. built him his own gym on set; Mental Floss reported that the production team stuck to a tight shooting schedule to give the superstar plenty of practice time. Since so many legendary basketball players worked on the movie, Jordan famously organized some of the coolest pick-up games imaginable; according to CBS Sports, extra Keith Gibbs said that Space Jam actors got to shoot hoops with Charles Barkley, Reggie Miller, Alonzo Mourning, Charles Oakley, and His Airness himself.

It may still be awhile before fans get to see Space Jam 2, but it certainly sounds as though it's going to be just as epic as the original.