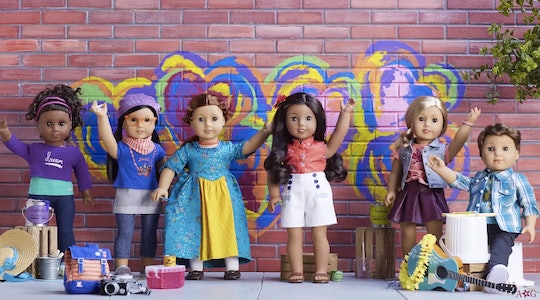 An American Girl Boy Doll Will Be Available Soon

Good news, parents! And anyone who's a fan of the American Girl line of dolls. American Girl is finally releasing its first boy doll, and people are pretty excited about it. For 2017, the company is committed to releasing a larger set of dolls than in previous years, and one of those dolls is Logan Everett, a boy who plays drums alongside his friend Tenney Grant, a singer and songwriter from Nashville, Tennessee. So when will the American Girl boy doll be available? Sooner than you may think.

The Logan doll stands 18 inches tall, and will have short brown hair, gray eyes, and an original outfit. He also comes with a drum set, as is fitting for a drummer. His bandmate, Tenney, seems to be the real focus of their partnership, but it's still very important and exciting that American Girl has decided to release a boy doll as a new addition to its beloved lineup. According to its website, "Tenney and Logan challenge each other to grow as musicians, and their partnership teaches girls the importance of being open to collaboration and compromise." That seems like a great goal, and kind of a big task for such little dolls.

...Adding a boy to our lineup has been a number one request for a very, very, very long time.

So when will Logan and his bandmate be available for parents to buy for their kids? (Or themselves, no judgment here). Very soon, apparently. In fact, according to the Huffington Post and the American Girl website, Tenney and Logan will both be available on Feb. 16. This week! So soon!

There will also be a Tenney book series to coincide with the new dolls, and Logan is sure to make an appearance in the books. According to a press release on Yahoo! Finance, the series is meant to "inspire girls to share their authentic selves and find the courage to pursue their dreams":

As her star rises, Tenney goes from writing songs in her family's backyard, to taking center-stage at her school Jamboree, to playing her music in a professional concert. She learns quickly that it takes hard work and grit to stay on the path to becoming a great performer—but it's going to take extra determination if she wants to stay true to herself and her music.

And it sounds like Logan will be along for the ride.

The announcement was met with excitement from fans. On Twitter, @JessMAdams10 tweeted, "OMG! Is that a boy @american_girl doll? Can't wait to add him to my collection."

And over on Instagram and YouTube, the American Girl company released a video introducing the 2017 dolls all hanging out together, painting. Except for Logan, who decided to sit that activity out in favor of using a bucket as a drum nearby.

Check out the American Girl website to learn more about Logan, Tenney, and other characters who will be released in 2017.

More Like This
Kids With Head Lice Don't Need To Miss School, AAP Stresses In Updated Guidelines
Reese Witherspoon Doesn’t Think Her Daughter Looks That Much Like Her
McDonald's Halloween Buckets Are Coming Back To The Delight Of Every '90s Kid
Iranian High Schoolers Remove Hijabs To Protest The Government