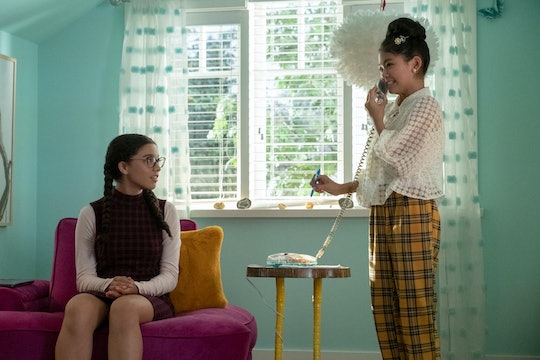 Fans of Ann M. Martin's beloved book series The Baby-Sitters Club will soon be able to return to Stoneybrook, Connecticut, to share the friendship and adventures of Kristy, Claudia, Stacey, Dawn, and Mary-Anne with a new generation of kids thanks to a modern reboot coming to Netflix. But just when will The Baby-Sitters Club be on Netflix? Mark your calendars for a summer premiere.

Netflix's The Baby-Sitters Club follows Kristy Thomas (Sophie Grace), Claudia Kishi (Momona Tamada), Stacey McGill (Shay Rudolph), Dawn Schafer (Xochitl Gomez), and Mary-Anne Spier (Malia Baker) as they launch their babysitting business as navigate the many ups and downs that come with growing up. And much as Martin did in the book series, Netflix's adaptation of The Baby-Sitters Club, which lands on the streaming network July 3, aims to champion female empowerment and entrepreneurship along with the strong bond of friendship formed between five very different middle-school aged girls.

"Ann M. Martin, the series author and show producer, conceived the idea of these inspiring young girls with different backgrounds, personalities, and opinions that were brought together by a business venture they created and bonded through the friendships they forged," Netflix said in a statement.

While the show is a modern adaptation of the books, which were published by Scholastic from 1986 to 2000, there's one major piece of nostalgia in Netflix's The Baby-Sitters Club teaser trailer: a corded, clear, see-through landline phone.

The trailer begins with the sound of a ringing telephone as the phrase, "Every generation has a calling" plays across the screen — in a font reminiscent of the early books. Slowly the camera follows a purple telephone cord through a cluttered room until landing on the five baby-sitter club members excitedly gathered around the phone during their first meeting. "Good afternoon, Baby-Sitters Club," Grace, who plays Kristy the club-president, says as the teaser ends.

According to Netflix, Alicia Silverstone plays Kristy's single mother, Elizabeth Thomas-Brewer, who begins a relationship with single dad Watson Brewer, played by Mark Feuerstein. If the show follows the book series, the two will eventually marry and combine their families.

Netflix first announced plans to produce a 10-episode season of The Baby-Sitters Club with a production team spearheaded by Broad City's Lucia Aniello, GLOW's Rachel Shukert, and Martin herself (would any adaptation of The Baby-Sitters Club be complete without her?) in February 2019, according to Teen Vogue. In a press release issued at that time, Martin said she was eager to see her beloved series inspire a new generation of children. "I'm very excited about the forthcoming series on Netflix, which I hope will inspire a new generation of readers and leaders everywhere," she said.

While the show's July 3 premiere date may feel like a lifetime away, it may actually be the perfect opportunity to read a few of the series' books with your own future Baby-Sitters Club fan.