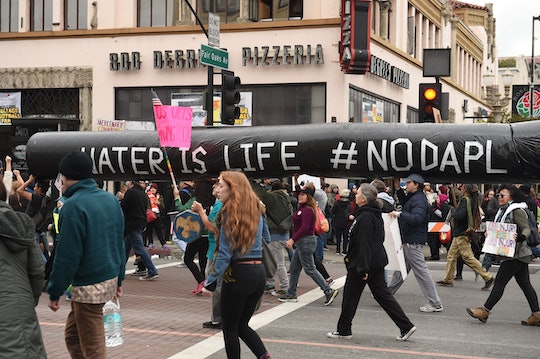 When Will DAPL Construction Begin?

Just days into his job, President Donald Trump's press secretary Sean Spicer has received plenty of media attention for his "alternative facts" about the size of Trump's inauguration crowd. But for two seconds, we need to stop focusing on whether Spicer lied, because Spicer said something alarming at a press conference about the controversial Dakota Access Pipeline. Spicer made comments that suggest the decision to end construction of the pipeline will be overturned. So when will the Dakota Access pipeline construction resume — and what can be done about it?

Under the Obama Administration, the federal government denied a permit to Energy Transfer Partners, who are behind the Dakota Access Pipeline project back in December. But that victory has always been under threat thanks to the change in administration.

Although Trump kept silent on the topic for awhile, Reuters reported that Trump showed support for the Dakota Access Pipeline in a memo. On top of that, Trump's head of the Dept. of Energy Rick Perry is on Energy Transfer Partner's board of executives, Mother Jones reported. Additionally, Trump himself used to be a stakeholder in Energy Transfer Partners, and the president of ETP donated to Trump's campaign.

The Hill reported that Trump has not signed any executive actions related to the Dakota Access pipeline project. Spicer confirmed this much at a press conference on Monday:

I'm not going to get in front of the President's executive actions. But I will tell you that areas like the Dakota and Keystone pipeline areas that we can increase jobs, increase economic grown, and tap into America's energy supply. That's something that he's been very clear about.

Although executive actions have not been taken yet, it seems very likely they are coming soon. Spokesmen for Trump and Energy Transfer Partners did not respond to Romper before publishing.

It's unclear exactly how soon construction can begin once Trump does sign off on construction. Deborah Sivas, an environmental law professor at Stanford University, told Mother Jones back in December it could happen very fast. "Trump could sign off on it in week one," Sivas said. "All it takes is one sentence."

Many people are against the Dakota Access Pipeline because they believe it is a threat to the natural resources of the Standing Rock Sioux Native American tribes who reside in North and South Dakota.

For many, risking an oil spill that could contaminate the tribes' only source of drinking water is too of a high price to pay. And although Trump may support the project because it they think will create about 8,000 jobs, experts believe the number of jobs will actually be about half that projected amount.

And protesting construction continuing will be more difficult than before. That's because the oil companies associated with the project have hired private security to increasingly block the protestors, The Wall Street Journal reported.

Protests at the site of the pipeline have increased recently, with CNN reporting 16 arrests last week. You can still contribute to the Sacred Stone Legal Defense Fund here, which will be used for the protesters' legal expenses. And if you're against construction of the pipeline potentially being resumed, bug your elected officials to voice your opinion.

It looks like the protesters can't stop fighting now — because if they want to stop the pipeline from being finished, they'll have to fight harder than ever.