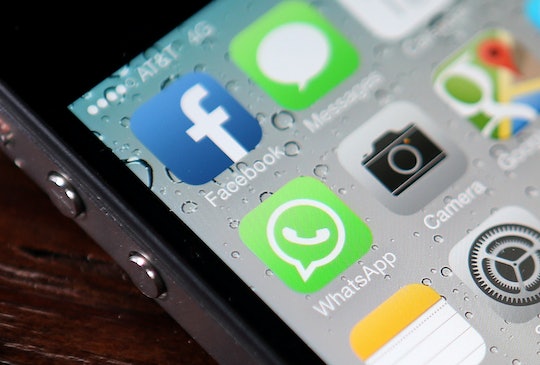 A new feature is being rolled out on Facebook — and no, it's not a payment scale, like those copy-and-paste statements every family member has posted warning people about that have periodically popped up on your News Feed for years now. Instead, the social media site is launching Stories, a feature that involves users sharing photos and videos with friends that vanish after 24 hours. So when will the Facebook update come out? As it turns out, users won't have to wait long at all.

Does the whole "disappear after 24 hours thing" sound familiar? That's probably because, according to USA Today, the new feature is borrowed from the popular messaging service Snapchat, which all the kids are into nowadays. All the big social media networks and apps are starting to look suspiciously alike, actually. For example, WhatsApp's Status allows people to share images, GIFs and videos as a status update — similar to Facebook. And back in August, Instagram also debuted Stories, which is a lot like Snapchat's own Stories feature. Does anyone else remember MySpace? Just me? OK then.

Various reports have stated that Facebook is rolling out this new feature starting... Tuesday. So yea, not a long wait at all.

According to The Verge, Stories will work like this: in order to create a story, the Facebook user can either swipe right on their News Feed, or tap the camera in the top-left corner on their mobile app. When the "creation" is ready, they can either share it with all their friends, or set it to only send to a selection of friends they choose.

If they share it with everyone, the post will show up in a horizontally scrolling feed of stories that will now go at the top of the Facebook app (yes, just like Instagram Stories). If the audience is limited, the message will appear in “Direct,” a new part of the Facebook app that is similar to Instagram’s direct messages.

Why are so many of these new social media features across various platforms so similar to one another, anyway? Well, the Verge also reported back in 2014 that Facebook owns WhatsApp, and, as Business Insider reported, Facebook owns Instagram, as well. Is it any wonder that when people at any of the companies figure out a feature that works, they duplicate it on other platforms with only minor tweaks?

CNN Tech reported that back in 2013, Facebook also tried to buy Snapchat for $3 billion, but the company was unsuccessful. It appears that since then, the company has tried to mimic what has worked for the rival app, which might be part of why users of several different social media outlets get a little deja vu when switching between apps.

The Verge reported that Stories is the first Facebook app to get animated face filters, so Facebook is making small changes to make sure the feature is unique on the platform in some way. As the new update rolls out across Facebook and users start to notice, it will be interesting to see if it receives positive reactions from the site's billions of users.

So technically, the Facebook update comes out today, although not everyone might notice the change right away.