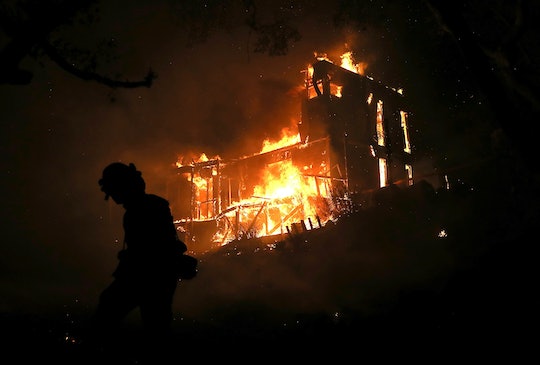 Only Two Of The California Fires Have Been Contained

On Friday, wildfires continued to wreak havoc in Southern California for a fifth day, injuring several people and leading to extensive evacuation orders. There are a lot of factors that could impact when the fires will be contained in California, with "abnormally dry and breezy conditions" causing experts like the National Weather Service to warn that the risk of fire could stay high for at least a few more days, according to The Washington Post. By Thursday morning, the fires had incinerated nearly 120,000 acres of land in California's "worst fire season ever," Vox reported.

The Santa Ana winds, which are helping to drive the fires, happen every year, but they’ve never been like this, according to a climate scientist who spoke with The Los Angeles Times. UCLA's Daniel Swain told The LA Times:

The [relative] humidities right now along the coast are much drier than what you’d normally see in the interior desert in the summertime. Once you get down to 1% or 2%, you’re down almost as low as is physically possible.

Plus, rainfall in California is below historical averages for the season. Swain went on to say:

Normally if we had a little bit of rain, there’s some moisture in the soil to recover. But there is no rain in sight, about as far as I can possibly say about weather.

But Swain added that the strong winds should "diminish" soon. So, is there an end in sight?

But another blaze, the Lilac Fire, started Thursday morning and grew to over 4,000 acres by that night, The Washington Post reported.

"Red flag warnings" for fire danger are reportedly in place for "much of Los Angeles and Venture Counties" until Sunday, the National Weather Service reported. So at the very least, some of the fires in California are likely to persist through the weekend.

And although officials said the majority of residents in Los Angeles who evacuated would be allowed to return to their homes soon, Los Angeles Mayor Eric Garcetti warned that it was “still an insecure time,” and that high winds could pick up again at any point, according to The Washington Post. Depending on the weather, winds, and humidity conditions, Californians might have to continue to deal with the fires for a few days yet.

Thankfully, two blazes — the Riverdale Fire and the Little Mountain Fire in San Bernardino — are fully contained, according to Vox. But others are still burning and are tough to control. Ventura County Fire Chief Mark Lorenzen reportedly said at a press conference Monday night:

The prospects for containment really are not good. Mother Nature is going to decide when we have the ability to put it out, because it is pushing hard with the wind.

There's only so much firefighters can do in this situation, and like Lorenzen said, Mother Nature is really the one in charge here. Wind gusts of 40 to 60 miles per hour are expected through Saturday, and the winds, coupled with low humidity levels, could continue to cause "very rapid fire growth, long range spotting," and "extreme fire behavior," Newsweek reported.

Fortunately, the most severe winds are supposed to "slacken" Friday and Saturday, which should at least lessen the fire danger, according to The St. Augustine Record. But the reality is, anything could still happen.

The California National Guard said it mobilized more than 1,300 personnel to help fight the wildfires, The St. Augustine Record reported. But many of them have never seen anything like this, and it's hard to predict what will happen. Ron Lane, San Diego County’s deputy chief administrative officer, said they've never experienced December winds like these. When it comes to the Lilac Fire, he told The Washington Post:

We are nowhere near the end of this. There are thousands of homes that are within the path of these fires.

The best thing anyone in the possible path of the flames can do right now is listen to officials, stay safe, and hope for a swift end to the California fires.