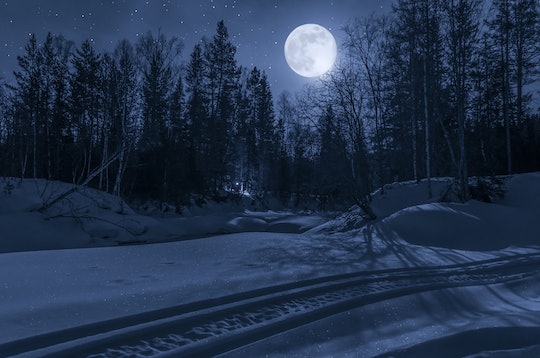 Here's When The Full Cold Moon Will Happen

Each full moon has many different names. Cultures from Eastern Europe, China, Japan, Africa, and many Native American nations have taken pains to name each moon with something significant. The full moon in December is also known as the Full Cold Moon. This year, the Full Cold Moon is also the only supermoon of the entire calendar year for 2017. So, when will the Full Cold Moon happen?

The Full Cold Supermoon will rise the evening of Sunday, Dec. 3. While it's brightest at moonrise, which occurs at 4:47 p.m. Eastern Standard Time, it will remain illuminated and large in the sky until the wee hours of Monday morning, according to Space.com.

A full supermoon occurs when the earth and the moon are particularly close together, something referred to as perigee. This doesn't happen every month, so it's truly an awesome sight when it does. The moon will appear much larger and much brighter than it does at any other point during the year. According to Space.com, you also see more of the moon on that day than at any other time — about 59 percent of it, to be exact. If you've ever seen a supermoon, you know just how close it looks, but it's still impossible to capture on your iPhone. Trust me, I try every time.

I spoke with traditional Chinese astrologer and acupuncturist/apothecary, John Lin of New York City and asked him, "When will the full cold moon happen, and what does that mean for us?" He tells Romper that the Chinese culture refer to it as The Bitter Moon due to the bitterly cold weather that often accompanies the phase of the moon. He underscored that it would be happening Sunday, Dec. 3 into Monday morning, and that it has a lot of significance. "The full moon is a time for harvesting, be it plants or friends. It's an auspicious time to make friends or to have them over to enjoy a meal together." He went on to say that "Chinese people believe that many babies are born during the full moon, but that during the bitter moon, it represents a moment of truth, and babies born to it are said to be beacons of the community, ready to take up leadership roles and be our future doctors, lawyers, and leaders."

He says that this is the end of the year of the Fire Rooster, so children born under this moon will be more powerful than normal. "A full moon fire rooster will be very chatty, smart, and very active. Fire roosters love being the center of attention and tend towards sports as hobbies." Maybe this year will see the next LeBron James or David Beckham born on the full moon.

For those of us who don't follow astrology with any real consideration, the full moon is still a beautiful event best seen in an area without a lot of light pollution — or clouds. It's rising around 5 p.m., so many of us with little kids may want to push dinner back 20 or 30 minutes so we can take the time outside with them to take it all in. Kids love the idea of a supermoon, and this Full Cold Moon shouldn't disappoint. So bundle up, grab some cocoa (with Bailey's for you), and head outside to see the beautiful event.