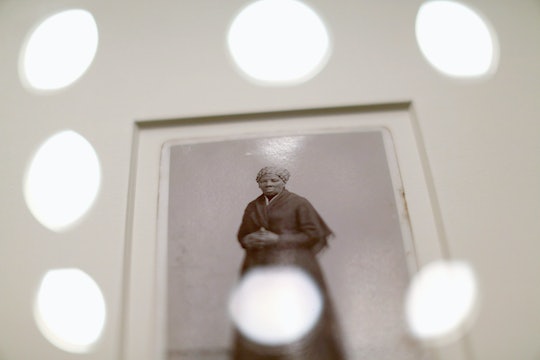 When Will The Harriet Tubman $20 Bill Come Out? It'll Be A Few Years

U.S. Secretary of the Treasury Jack Lew announced on Wednesday that Americans can expect a lot of well-deserved changes in paper currency going forward. While the newly revitalized hip-hip icon Alexander Hamilton will stay on the front of the $10 bill, the back will soon feature suffragettes, the $5 bill will be home to civil rights leaders, and, best of all, Andrew Jackson is losing his spot on the $20 bill to Harriet Tubman. When will the Harriet Tubman $20 bill come out? Don't go running to the bank just yet; the bill won't be available for some time.

Politico reported that the designs will likely be finalized by 2020, and speculated that them Treasury may ask the Federal Reserve to speed up the process to get the bills into circulation as soon as possible. But how soon is soon, exactly? According to the New York Times, the bills won't make it into circulation for another decade after the designs are finalized. Haven't we waited long enough? Why on Earth does it take so long just to print money? The process is actually pretty complicated.

While the faces on our currency might be the most important feature to your average citizen, the Treasury's primary concern is counterfeiting. To that end, it's only interested in redesigning a bill to add extra security measures, not to make us noisy feminists happy... Until recently, when we got so damn noisy, the Treasury finally gave in.

But it's still running things on its own schedule. As New York magazine pointed out, the Treasury was told back in 2008 that it had to add a tactile feature to paper currency in order to "provide meaningful access ... for blind and other visually impaired persons," and it still hasn't gotten around to that. The $10 will be the first to comply with the ruling, but it's not slated to come out until 2020. That's why, when people first started crowing about getting a woman and a person of color on the $20 bill, the Treasury offered up the $10. It were planning on redesigning it anyway, so it made the most sense from its perspective. And while it has now decided to redesign the $5 and $20 bills as well, it won't be completing the redesign until security necessitates it.

So while it seems simple enough to just Photoshop Tubman's face into Jackson's spot, there's actually a lot more that goes into a currency redesign. The new $20 won't just have a new face; it will have the tactile feature that's planned for the new $10, the paper or ink may change, and there will be additional security measures like holograms, hidden threads, or maybe something involving alien D.N.A. Who knows?

It's unfortunate that people can't get a crisp, new Harriet Tubman $20 bill tomorrow, but it's pretty understandable, once you learn how big of a process it is to overhaul a bill. And people have already waited 120 years to see a woman and a person of color on paper currency again, so really, what's 14 more? (Not really.)