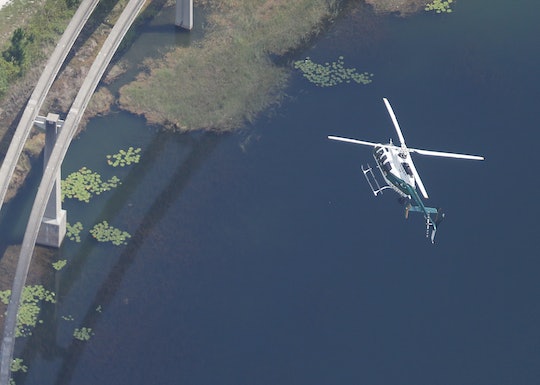 When Will The Lagoons Reopen At Disney World? The Tragic Attack Closed Disney Beaches

Nebraska family on vacation was enjoying an outdoor movie night at the Grand Floridian resort when their 2-year-old, Lane Graves, waded into the Seven Seas Lagoon. In an instant he was grabbed by an alligator and dragged underwater. His body was recovered on Wednesday by rescuers about 15 yards away from where he was attacked. The lagoons were immediately closed as a precaution. When will the lagoons reopen at Disney? There are a few safety measures that might need to be worked out first.

Romper contacted Disney for comment about what its proposed response to the attack might be, or when the Disney lagoons might be re-opened. "All of our beaches are currently closed, and we are conducting a swift and thorough review of all of our processes and protocols," Jacquee Wahler, Vice President of the Walt Disney World Resort, wrote in a statement. "This includes the number, placement and wording of our signage and warnings."

Walt Disney World announced today 6/16/2016 that all resort beach areas and marinas are currently closed. The ferry boats have resumed operations but watercraft on the Seven Seas Lagoon and Bay Lake have been suspended. Keep checking here for further updates.

Disney closed all of the beaches in the resort area "out of an abundance of caution," according to CNN, but there are still lingering questions about whether the attack could have been prevented by the company.

While reports say the area was clearly marked with "no swimming" signs, the boy wasn't swimming — just wading in what was reportedly only 6 inches of water under his parents' supervision. Who could have possibly expected something so horrible would happen at the "happiest place on earth"?

Of course, many were quick to blame the parents. Night time is when alligators are most active. Florida is built on a swamp. If the signs say "no swimming" shouldn't it have been obvious that wading would be dangerous too?

But many more are placing the blame on Disney, which should have taken better precautions to protect a beach designated for families to play and enjoy events. But law enforcement has not officially named anyone — Disney or the parents — liable for the attack.

Here's a look at the beach at the Seven Seas Lagoon, where little Lane was killed.

And here's a look at the signs posted in the area.

No swimming because of a steep drop-off and deep water isn't really the same as "Alligators could jump out of the water and eat your babies." As a parent myself, I never would have guessed something so awful could happen.

Here's an example one Twitter user shared of alligator warning signs posted at other ponds and lakes in the area.

CNN also reported that Robert Vachon, who was at the same resort on his honeymoon, said when he saw the beach during a ride on the monorail, he thought it looked like a dangerous spot.

"I was wondering why it's not fenced off," he said.

According to CBS News, when Disney spokeswoman Jacquee Wahaler was asked whether Disney was aware there were alligators on the property, she said there were "no swimming" signs posted. CBS News added in a tweet that Disney had "full-time staff observing the waters for gators."

But now, it's clear Disney might need to do more to reassure parents that this type of incident won't happen in the future. The lagoons surrounding the property are vast and connected to a series of canals, and alligators are common throughout Florida, so it will be tough to come up with a strategy to protect kids who visit. For now, the lagoons remain closed until further notice.