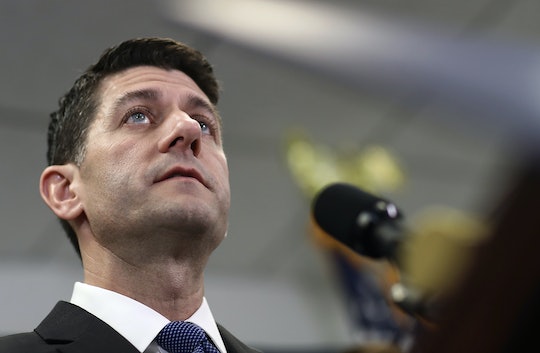 When Will The New Healthcare Bill Be Voted On?

It seems that the American Health Care Act is back from the dead. On Wednesday morning, conservative lawmakers gathered for a closed-door meeting to discuss a new version of the GOP bill that would repeal and replace former President Barack Obama's Affordable Care Act. But when will the new healthcare bill be voted on? Some members of Congress have suggested that a vote could happen as early next week, but that's not a guarantee.

According to CBS News, some conservative lawmakers who attended the closed-door House GOP meeting Wednesday morning believe a vote on the ACA repeal bill could be just around the corner. But Speaker of the House Paul Ryan, a Republican from Wisconsin, has said that the House will not vote on the updated American Health Care Act until "we get the votes," CBS News reported.

Conservative lawmakers may be closer to achieving that goal, though, to the determinant of millions of Americans. The ultra-conservative House Freedom Caucus had announced Wednesday that it backs this version of the bill, according to Bloomberg. The Freedom Caucus's refusal to back the AHCA is why Trumpcare went down in flames in March, so this endorsement gives the GOP the key support it needs to move forward.

Conservatives first laid eyes on the new version of the American Health Care Act on Tuesday night, when an amendment to the bill was introduced by Republican Congressman Tom MacArthur of New Jersey. The amendment, by the way, is a doozy; according to Vox, MacArthur's amendment would allow states to opt out of key provisions in the Affordable Care Act such as the ban on denying insurance to people with pre-existing conditions or the mandate to cover preventive services and maternity care without cost-sharing. That sounds like the worst part, but it's not — also according to Vox, the amendment would shield members of Congress from the repeal of the Affordable Care Act.

Let me repeat that: MacArthur's amendment would shield members of Congress from the repeal.

How? Lawmakers and their aides are required to purchase insurance coverage through the healthcare exchange. If congressional staff live in a state that opt-outs of the ACA's requirements, their health plans would be safe thanks to an exemption currently written into the amendment, Vox reported. The rest of Americans who bought health insurance through the marketplace, though, would lose those benefits because, you know, state's rights or whatever.

In other words: Taxpayers would still pay for Congress members to enjoy access to healthcare that those very lawmakers want to deny taxpayers.

According to Vox, MacArthur issued a statement on Wednesday morning that said he will work on making sure that congressional staff is "subject to the same rules, provisions, and protections as all other Americans." Closing that loophole doesn't make his amendment any better because it still would rip away healthcare from people with pre-existing conditions and people living in poverty. Let's hope this version of AHCA goes down like the last one.