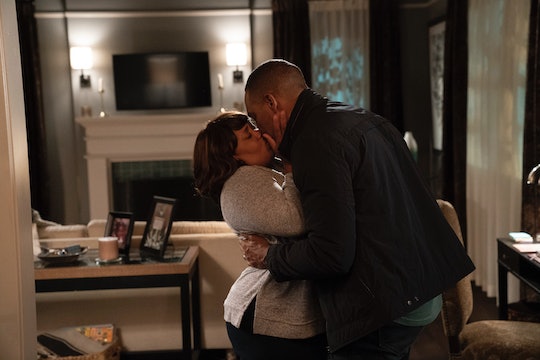 A Crossover Between 'Station 19' & 'Grey's Anatomy' Is Always A Possibility

The Shondaland universe is full of crossovers. Grey's Anatomy spawned Private Practice and Station 19, and How to Get Away With Murder took a visit to Scandal's part of town. But the connection between Grey Sloan Memorial Hospital and Station 19 is stronger than most, thanks to the marriage between leads Miranda Bailey and Ben Warren. They're still together, so the shows are bound to overlap from time to time. So when will the next Station 19 and Grey's Anatomy crossover episode be?

Recently, the shows experienced the same traumatic event from two very different perspectives when a windstorm ravaged Seattle. The doctors of Grey's had patients to look after (and smooches to share in the shelter of an ambulance) while the firefighters of Station 19 went out into the city itself to help (and also had romantic drama of their own). The aftermath of the storm was left unresolved in Station 19, so it would make sense for there to be another crossover when it continues in Season 2, Episode 8.

While talking to TV Guide, showrunner Stacy McKee didn't sound too positive about the possibility of a crossover in the winter premiere. Though Station 19 would pick up directly where its mid-season finale left off, you probably won't see any Grey Sloan staff members in "Crash and Burn." But that doesn't mean the two shows will never overlap ever again.

Though Station 19 has focused on Ben's point of view while Grey's focused on Bailey's, their relationship still unites both series. According to McKee, that means working with the writers on Grey's to tell the story in a cohesive way. Being set in the same world means that sometimes crossover elements will be more subtle, like Ben and Bailey separately dealing with identical problems. Issues that affect Seattle will affect the hospital and the firehouse, even if characters don't always jump from show to show.

That was something McKee hoped to continue doing, telling TV Guide that she loved those small signs of connection in the larger Shondaverse. She felt they enriched and widened the universe, plus they were a lot of fun to do. It sounds like if there's an opportunity for a crossover, McKee might jump on it. She didn't pin down specific future episodes that would be crossovers, but instead seemed to indicate that the option was always there.

And there are plenty of ways for the shows to find common ground outside of Ben and Bailey's marriage. The firefighters are out there rescuing people who then need medical help that can be provided by the doctors of Grey Sloan. Any major event could lead to a crossover if the writers choose to go down that path.

Grey's Anatomy will always be a part of Station 19's DNA because one show was born out of the other. Viewers may not know exactly when it will happen, but as long as both shows are on the air, they can decide to indulge in a crossover whenever they want.