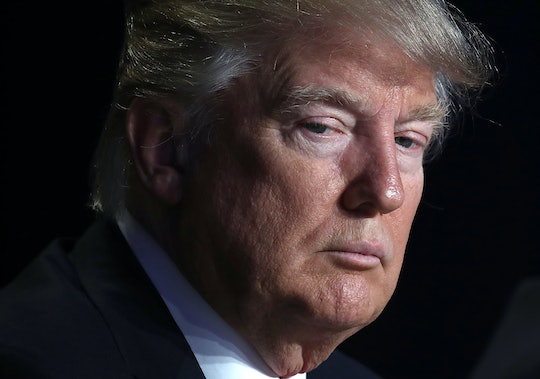 "Repeal and replace!" was the rallying call in President Donald Trump's stump speeches, and perhaps his loudest campaign promise besides building a wall along the U.S.-Mexican border during last year's election. Trump had put Obamacare squarely in his presidential sites — President Obama's sweeping healthcare reform act otherwise known as the Affordable Care Act. In his first executive order as president, Trump made it easier for Congress to begin the process of rolling back regulations and requirements. When will the Obamacare replacement come out? Trump actually managed to give an answer to the American people when speaking in an interview with Fox News' Bill O'Reilly that aired just before the Super Bowl.

Even though Trump promised that Obamacare would be repealed and replaced "in the same hour" during his first press conference since the election back in January, it turns out America is going to have to wait a year for that congressional healthcare switcharoo. Speaking to O'Reilly, Trump said the Obamacare replacement plan will come out sometime in 2018, or more — well, less — specifically: "Maybe it'll take until sometime into next year." Trump reassured O'Reilly and those watching that they are "certainly gonna be in the process" and that process is "very complicated."

It certainly must be pretty complicated, given that the only Obamacare replacement option right now is... letting states choose to stick with Obamacare or choose a "state alternative." That is legitimately what the GOP has presented as their Obamacare solution, in a bill introduced last month by Sens. Bill Cassidy of Louisiana and Susan Collins of Maine. The only hang up there is that neither Cassidy, Collins, or their bill defines what the "state alternative" actually looks like, so right now, the GOP plan to replace Obamacare is a big fat "We have no idea."

But as Trump is more than happy to remind pretty much anyone who will listen anymore: "Obamacare is a disaster." Even though 20 million previously uninsured Americans now have health insurance that they didn't have before — a literal "Thanks, Obama!" moment. And, as The New York Times noted, health care coverage became more comprehensive under the Affordable Care Act by mandating coverage for maternity care, drug addiction treatment, and contraceptives.

Is the Affordable Care Act perfect? Hardly. But it's certainly better than what this country previously had in place, which was a big ol' basket of nothing. And now that Trump has pushed out the GOP's plan to replace Obamacare sometime into 2018 — because it's "very complicated" — it looks as though he's bought Republicans some time to come up with something, or, anything at all, really, to replace the health care plan they seem to hate so much.