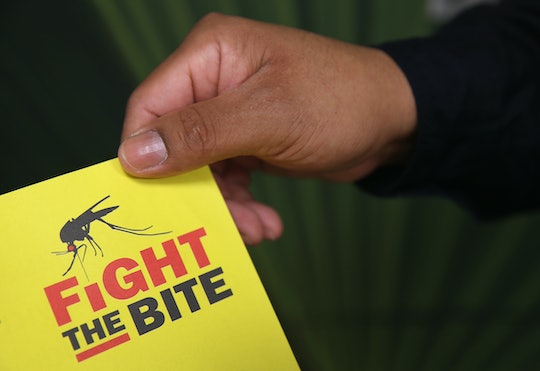 When Will The Paper Zika Test Be Available? All That Stands In The Way Is Funding

The spread of Zika is only expected to get worse this summer, with the World Health Organization expecting up to four million infected by the end of 2016. The virus is currently being actively transmitted in 49 countries, according to Quartz, and there's still no vaccine or treatment available. But there is good news on the horizon: researchers from Harvard University, the Massachusetts Institute of Technology, and other universities have developed a rapid paper test for the virus. As for when the paper Zika test will be available to health care workers in the field, that all depends on money.

Currently, patients are diagnosed by identifying Zika antibodies or pieces of the viral genome in their blood sample, via a test called polymerase chain reaction, or PCR. Unfortunately, these tests can take days or even weeks, and the antibody test can't distinguish between Zika and dengue, which is a big issue in areas where both infections are prevalent. The new paper Zika test takes just a few hours, according to MIT, and is much more convenient and cost-effective, so it could be used right in the field.

The test, based on technology originally developed to test for Ebola in 2014, can detect Zika in blood, urine, or saliva samples in concentrations as low as 2 or 3 parts per quadrillion, causing synthetic gene networks embedded on small discs of paper to change color from yellow to purple. While the change is visible to the naked eye, researchers have also developed an electronic reader for faster results.

The paper discs are freeze-dried and can be stored at room temperature, making them easy to transport. That, plus the lower cost, higher sensitivity, and faster results make this test truly revolutionary. So when will it be rolling out? According to team leader James Collins, Ph.D., of the Wyss Institute for Biologically Inspired Engineering at Harvard University, "[W]e envision a custom-tailored diagnostic system could be ready for use within one week’s time." All they need, it seems, is the cash to mass-produce: "We are currently pursuing multiple opportunities to secure private and public funding in order to commercialize this diagnostic system and make it available to the world’s health responders."

Collins might want to focus more heavily on private funding. Back in February, the Obama administration called for $1.9 billion in emergency Zika research funding, according to The Atlantic, but so far, Senate Republicans have refused to fork anything over. Some want to wait until fiscal year 2017 begins in October — which is after the summer is over, and the U.S. Zika threat will have reached maximum impact. Meanwhile, funds set aside for the U.S. Ebola crisis that never quite materialized are sitting around gathering dust. Let's hope that Collins' team gets a grant from Bill Gates or Mark Zuckerberg sometime soon, because if they have to wait for Congress to agree on something first, things aren't looking good.