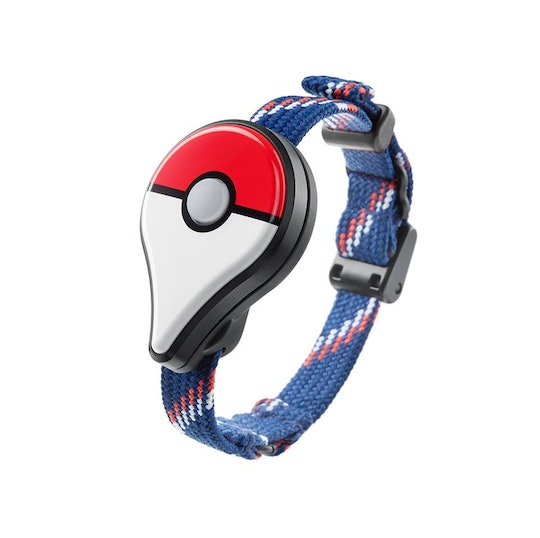 When Will The "Pokemon Go Plus" Wristband Hit Stores? The Accessory Debuts In The Fall

"Pokemon Go" mania is absolutely insane. I can't walk around my town without seeing people — both young and old, walking around glued to their phone screens. The app, which debuted just a few weeks ago in the beginning of July, already has millions of users playing it, and its parent company, Nintendo, will debut an accessory to go with the hit app in the next few months. So if you're wondering when will the "Pokemon Go Plus" wristband debut — don't worry, it is coming out soon enough.

The "Pokemon Go Plus" wristband is a unique accessory that enhances the experience of the "Pokemon Go" app and takes away a lot of the hard work. The thin wristband is adorned with a tear shaped Pokeball that goes on the player's wrist and operates on Bluetooth technology. According to "Pokemon Go's" website, the device will let you enjoy "Pokemon Go" while players are on the move and therefore won't have to look at their smartphones. Gone are the days of people walking around town with their eyes glued to their phone screens without much regard to anything else. Instead, they'll have the "Pokemon Go PLUS" wristband to do all the hard work for them and alert them when to pull out their phones.

So when will this great invention debut? According to Nintendo, the accessory will be released in September 2016 and not at the end of July, as Nintendo had originally planned. According to Reuters, the "Pokemon Go Plus" wristband's delay is due to "software adjustments needed to keep it in sync with the game."

This wristband will be great news for the unfortunate few who have had mishaps while playing the game — and prevent those from happening again. Hopefully, for the price of the bluetooth enabled wristband, there will be less incidents of alleged drunk driving while playing "Pokemon Go", car accidents reportedly caused by obsessed gamers, and fewer alleged robberies.

Instead, with the impending wristband debut, players will be able to live their lives distraction-free and only have their phones out when the wristband alerts them that it is necessary to do so.

"Pokemon Go" addicts can have the wristband come September for the price of $34.99.

The "Pokemon Go Plus" wristband has the potential to do more good than harm for "Pokemon Go" players and those around them. Hopefully the hype of the app won't die down by September. I know I will be playing until I catch them all.