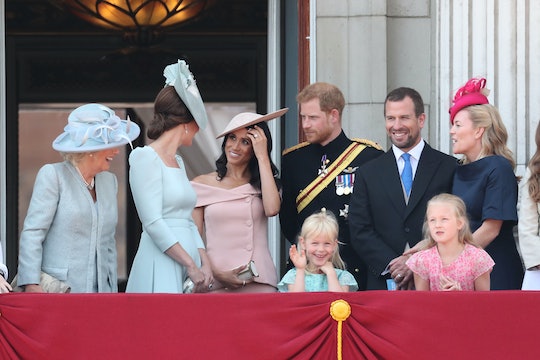 When Will The Royal Family Visit The U.S.? Here's What Their Calendar Looks Like

Now that the Duke and Duchess of Sussex's honeymoon is finally over (though the lovebirds can't say the same for their honeymoon phase), Prince Harry and Meghan Markle are all in when it comes to official royal duties. The royal couple has announced official visits to several countries, which has fans wondering when they will visit the United States, given Meghan's upbringing in California. Some royal family members have visited the United States before, but when will the royal family visit the United States next?

Rumors about Harry and Meghan planning a trip to the United States were rampant during the royal wedding mayhem. About a week before the grand affair, Meghan's father, Thomas Markle, announced he would not be attending due to a heart attack, TMZ reported. This announcement also came after a failed publicity stunt in which Thomas staged paparazzi shots of himself preparing for the wedding by reading British books, et cetera, Harper's Bazaar reported. Meghan released a statement just before the wedding. “I have always cared for my father and hope he can be given the space he needs to focus on his health,” she said, The Sydney Morning Herald reported. Afterwards, rumors broke that Meghan and Harry would be visiting her father in California soon, Express reported. However, no such trip has been reported. Instead, the newlyweds reportedly went to East Africa on their honeymoon shortly after the wedding, E! News reported.

Earlier this week, Kensington Palace announced on Instagram that Harry and Meghan would be going on an official visit down under this coming fall, visiting Australia, Fiji, the Kingdom of Tonga, and New Zealand. (The trip will coincide with the Invictus Games, an international athletic event for wounded, injured, and sick men and women who served or are serving in the armed forces, created by Prince Harry, according to the event's website.)

Queen Elizabeth II and the Prince Philip, Duke of Edinburgh have made several joint state visits to the United States in the past. The couple visited in 1957, 1976, 1991, 1983, and 2007, according to the official royal website. However, the Queen has not made an official state visit since June 2015, and she has not made one outside of Europe since 2010, when she visited Oman, according to the royal website. So, it seems unlikely that the 92-year-old has any trips planned to the United States.

Luckily, the Queen has several family members who will gladly make state visits on her behalf. For example, Prince William, Duke of Cambridge has officially visited the United States twice. In 2011, he and Catherine, Duchess of Cambridge visited California, The Daily Beast reported. And in 2016, the couple and their son Prince George visited President Barack Obama and Michelle Obama at the White House, Express reported.

So even though no one in the immediate royal family has a trip to the United States scheduled in the near future, it definitely wouldn't be a surprise if Meghan and Harry visited sometime soon. Not only would Meghan get to see her parents, but because of her American upbringing, American residents would surely be excited to see her.