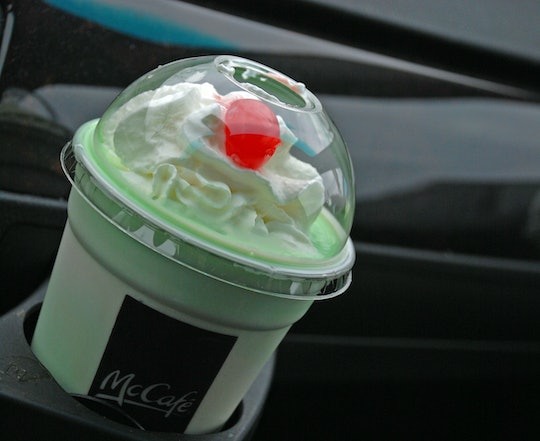 When Will The Shamrock Shake Be Available? Get Ready For Some Minty Amazingness

Long before the introduction of the Pumpkin Spice Latte, there was one seasonal drink that was eagerly awaited every year: the Shamrock Shake. Released around St. Patrick’s Day every year, this minty vanilla confection with its pastel green hue is one of the tastier signs of a coming Spring. As soon as Valentine’s Day passes, fans start to wonder when the Shamrock Shake will be available. Because even some of the harshest McDonald’s deniers have a soft spot for this sweet treat.

According to the McDonald’s site, the Shamrock Shakes have been around since 1970, and its sales help fund the construction of the original Ronald McDonald House in 1974. The Ronald McDonald House offers parents of hospitalized children a place to stay near their child’s treatment center. And since their introduction, Mickey D’s has sold over 60 million Shamrock Shakes. That’s a whole lot of shaking. (Apologies for the dad jokes.) Lastly, the shake’s official ingredients include vanilla reduced fat ice cream, Shamrock Shake syrup, whipped cream, and a maraschino cherry.

Is the Shamrock Shake in any way representative of Irish culture? No, not really. Is it healthy? No way. Is it a delicious treat worth the yearly splurge? Absolutely. And for maximum enjoyment, maybe don’t look up the caloric content, okay?

Okay, so here’s the good news: the Shamrock Shake is out now! On Feb. 17, 2016 news of the drink’s arrival dropped on McDonald’s Twitter page. And because St. Patrick’s Day falls on Thursday, March 17 this year, you will probably want to get your green milkshake fix before that time. This is not a drill.

If you need help finding one in your area, shamrockshake.com offers up information about the best McDonald's location for finding a Shamrock Shake near you. They're all self-reported, but would anyone lie about the location of a milkshake? And by just glancing over the entries, it looks like some people take their shakes very seriously.

Lastly, if you'd like to enjoy the minty-vanilla goodness of a Shamrock Shake but don't have time to drop by McDonald's, then there are a wealth of copycat recipes available. USA Today offers a simple version of the original, and Buzzfeed has the recipe for a Drunk Shamrock Shake if you want some booze with your treat. Because a little Jameson will liven up anything.

Whether you opt for a copycat version or the real thing, Shamrock Shakes have served as a tasty harbinger of Spring for almost 50 years. But they are a short-lived indulgence. So if you want to enjoy one, act fast!