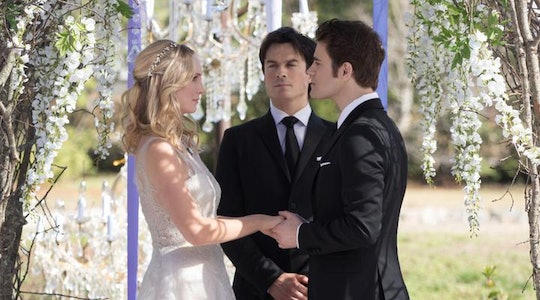 'TVD' Season 8 Will Be On Netflix Very Soon

Get ready to say goodbye, Vampire Diaries fans. The end of the popular vampire show is here and after eight long seasons of doppelgängers, vampires, ghosts, witches, and more, it doesn't seem real that it's actually coming to a close. But, unfortunately, it is. Thankfully, for those who just can't let go, you can rewatch every season online, but when will The Vampire Diaries Season 8 be on Netflix? Fans won't have to wait long to relive the final season.

Thanks to the latest deal Netflix signed with The CW last year, all The CW's shows will release their entire season on the streaming service eight days after their season finale airs. Therefore, The Vampire Diaries' last season will be available for streaming on Netflix as early as Saturday, March 18. So for those of you who missed this final season or the past few seasons or never watched the series at all, you'll be able to binge-watch the entire series very soon.

The Vampire Diaries began airing in 2009 when vampires were all the rage. From Twilight to True Blood, TVD fit right in with the vampire book series adaptation phenomenon that hit in the early 2000s and the show stayed popular for many, many years. It even inspired the spin-off series The Originals, which will begin it's fourth season on Friday, March 17, taking up The Vampire Diaries vacated time slot.

When The Vampire Diaries began, it was all about Elena Gilbert (Nina Dobrev) who soon realized her small hometown of Mystic Falls wasn't as safe as she always believed it was. After the death of her parents, she found comfort in Stefan Salvatore (Paul Weasley), but also ended up falling for his brother Damon (Ian Somerhalder), thus beginning one of television's most fought over love triangles.

Dobrev ended up leaving the series after the show's sixth season, but will return in the series finale. The show has changed a lot in the past eight years and the love triangle between Elena and the Salvatore brothers is now non-existent, thanks to Stefan now being fully in love with (and married to) Elena's best friend, Caroline Forbes (Candice King), and fine with Damon and Elena, also popularly known as "Delena," being together.

The only other remaining characters from the show's first season is Elena's other best friend and the town's resident (former) witch Bonnie Bennett (Kat Graham), Elena's first boyfriend Matt Donovan (Zach Roerig), and Elena's former teacher Alaric Saltzman (Matthew Davis), who's died and come back a few times throughout the series.

According to International Business Times, Elena's Aunt Jenna (Sara Canning), Tyler Lockwood (Michael Trevino), and Elena's little brother Jeremy (Steven R. McQueen) will most likely return for the series finale as well. So as sad as it'll be to say goodbye to this show that has dominated many fans' lives for the past eight years, at least viewers can always return to Mystic Falls if they choose to by way of streaming.

You can say goodbye to your favorite vampires, witches, and doppelgängers when The Vampire Diaries series finale airs on Friday, March 10 at 8 p.m. ET on The CW.