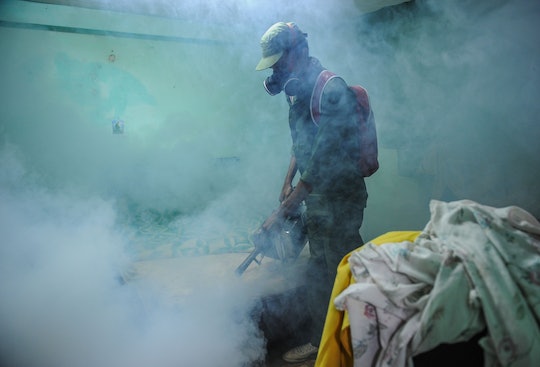 When Will The Zika Threat Be Over? The Outbreak Will Likely Worsen Over The Summer

The Centers for Disease Control and Prevention made several announcements last week about the spread of Zika in the United States and abroad. Among those announcements was the confirmation of Zika's link to the birth defect microcephaly and the first confirmed case of sexual transmission of the Zika virus between men. Given the advancements in research about the virus, when will the Zika threat be over?

Unfortunately, despite the efforts from the CDC and other countries' health ministries, a cure for Zika is not on the near horizon. Drug companies are scrambling to develop a vaccine because of the extreme danger the virus poses to pregnant women, but, according to The New York Times, experts say it could be years away. Several companies have recently announced that they are actively working on a vaccine, including the pharmaceutical giants GlaxoSmithKline and Sanofi Pasteur.

Many pharmaceutical companies have been accused of choosing not to create drugs for diseases that affect developing countries because they are less profitable, and that appears to be the case with Zika. Critics say that the industry has only taken up the charge now because the threat has moved to the United States. In a statement that announced its search for a vaccine, Sanofi Pasteur said:

Until recently, ZIKV [the Zika virus] was considered a rare and seemingly benign virus. However in May 2015, the Pan American Health Organization (PAHO) issued an alert regarding the first confirmed ZIKV infection in Brazil, and since then it has spread across the Americas. In the United States, authorities have reported a locally transmitted case of Zika in Puerto Rico, with reports of cases in continental United States in returning travelers.

In the company's defense, Zika presents a particular challenge to researchers because of its variations and ability to mutate quickly, according to TIME.

Because a vaccine may be far off, the CDC is advising prevention and caution. Since the disease is mainly transmitted by mosquito bite, screens, repellants, and nets are highly encouraged for anyone traveling to equatorial countries. Experts have also warned that pregnant women should avoid going to regions where the virus is being transmitted, and women thinking of becoming pregnant should wait at least two months to become pregnant after returning home from high-transmission countries.

But, since the confirmed cases of heterosexual and homosexual transmission of the Zika virus, the CDC has admitted that the scope of the threat has grown. CDC officials said that the ability for Zika to be sexually transmitted "might contribute to more illness than was anticipated when the outbreak was first recognized," according to ABC News. They are now advising testing for anyone who has traveled to affected countries in order to protect their partners and track the spread of the virus. The CDC published research about sexual transmission in their Morbidity and Mortality Weekly Report.

That said, there have only been 350 cases of Zika in the United States so far, and they have all been traced to to foreign travel. But, with the changing seasons, that number is expected to exponentially increase. In anticipation of that seasonal spike, U.S. health officials have asked Congress for $1.9 billion to help fight Zika in the United States and overseas, CBS News reported. House Republicans have assented to some funds, but they likely won't be approved until September.

Unfortunately, the mosquito that spread the virus in Central and South America is also common in the southern United States. As temperatures rise, it is expected that the number of cases of Zika will rise as well. Given that government funding is not expected until after summer and a drug treatment even beyond that, the threat of Zika is likely to grow through the summer months, especially in southern, coastal communities.