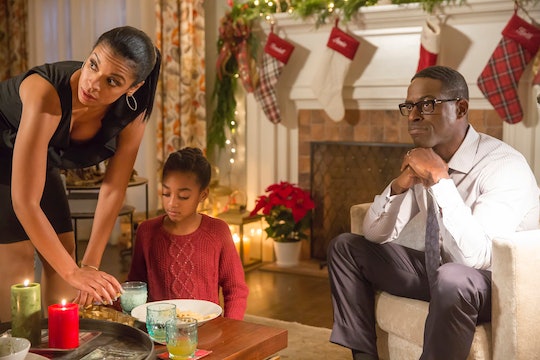 When Will 'This Is Us' Return? The Midseason Finale May End With A Cliffhanger

Tis the season for gift-giving and merriment, but it's also the time of year for some of our favorite shows to go on hiatus and NBC's latest hit drama This Is Us is no exception to that rule. Yes, sadly viewers will have to go without the beloved Pearson family is the coming weeks now that the This Is Us Season 1 winter finale is upon us. But just take heart in knowing that they won't be gone from us for very long. So when will This Is Us return exactly? According to the IMDB episode listing page for the series, the drama will be back in full force starting on Jan. 10, 2017, which is just a little over a month from now. And considering some shows have just geared up for a three-month long hiatus (looking at you, Once Upon a Time), I'd say this break doesn't seem so bad.

However, that doesn't mean that the wait won't still be excruciating even to the most patient of viewers. Because knowing This Is Us, the writers are probably going to deliver a cliffhanger that will make you want to find out what happens next ASAP. So far, this series has prided itself on being full of shocking twists and unexpected turns, so I very much doubt they would let a hiatus go by without throwing fans a curveball of epic proportions. So prepare your hearts while you can, because by the end of the episode, it may be broken.

Granted, this is all just mere speculation on my part and I don't mean to be a glass-is-half-empty type of person, but come on. This Is Us revels in heartbreak as much as it thrives on heartwarming moments. So I guess it could go either way. But considering the major twist they threw at viewers in the pilot, it just seems unlikely we'll be able to get by unscathed. In fact, even the mere title of the next episode "Last Christmas" suggests that something bad is looming. Who's last Christmas is it? William's? Another member of the family? Why is it the last?

Suffice to say, this series has made me pretty paranoid as of late. But regardless of how it ends, I'm just going to be sad to see it go for any extended amount of time. Let's just be thankful, though, that we won't have to wait very long for these characters to be back in our lives, so continue to keep your tissue stock in good supply.