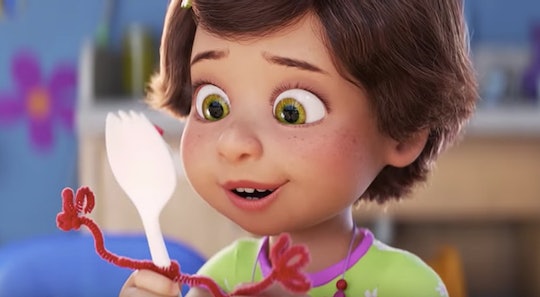 Fans waited a long time between the release of Pixar and Disney's Toy Story 3 and Toy Story 4, with nine years passing between the two films. So it's understandable many are eager to know when Toy Story 4 will be on Disney+. Fortunately, Disney fans can officially mark their calendars.

In January, Disney+ officially shared the release date for Toy Story 4 on the streaming platform. Starting on Feb. 5, 2020, as you can see when you search for the movie on Disney+, you can finally start streaming the beloved flick. "Due to existing agreements this title will be available on February 5, 2020. Add to your Watchlist now," the movie's page currently reads.

At the moment, Netflix has rights to Toy Story 4, with the movie being available for purchase via DVD or Blu-Ray, Disney+'s Twitter account confirmed in late November. "Thank you for contacting Disney+," the account tweeted a customer who inquired about Toy Story 4. "I want to apologize for the delayed response. We are just waiting for the rights from Netflix to go up so we can have Toy Story 4 on Disney Plus. Have a Magical Day."

The movie's release on Disney+ appears to match up with the theatrical release timeline. Toy Story 4 was released in June 2019, meaning it wouldn't be available to stream until February 2020 because there's typically an eight-month waiting period between a film's premiere and its available to stream date, according to Collider.

As we all wait for Feb. 5 to arrive, Toy Story 4 fans can enjoy original new content with their favorite characters from the movie. “I was fortunate enough to produce the Forky Asks a Question series,” Pixar producer Mark Nielson said during an interview with ComicBook.com. “These 10 films that we made for Disney+, and there’s another production unit within Pixar that made Lamp Life, the backstory of Bo Peep, before Toy Story 4, and that’s coming out on Disney+.”

Editor's Note: This article has been updated to include the release date for Toy Story 4 on Disney+.

This article was originally published on Dec. 4, 2019