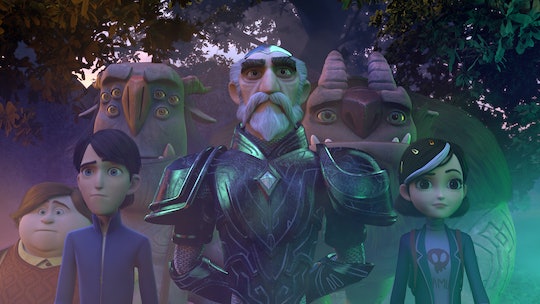 The Final Chapter Of 'Tales Of Arcadia' Should Be Coming Soon

Trollhunters has come to an end with its third season and while it's certainly hard to say goodbye, fans can rest assured that the Tales of Arcadia are far from over. In fact, they're only just getting started with two more installments of the popular series. The second installment is 3 Below and then there's Wizards. While 3 Below premiered in December 2018, many fans are wondering when will Wizards be released?

While there is still no official release date for Wizards, it is set to premiere some time in 2019. In July 2019, Diego Luna who stars as Prince Krell in Wizards told Inverse that he had "finished recording his lines," so it sounds as though things are wrapping up. In fact, ScreenRant reported that while neither Netflix nor DreamWorks Animation have confirmed a premiere date, it's expected to arrive in the fall of 2019.

Not much is known about the final installment of the Tales of Arcadia, but Netflix did release the show's synopsis. "DreamWorks Wizards brings together the three disparate worlds of trolls, aliens and wizards who have found themselves drawn to Arcadia," the synopsis reads. "The final chapter of the Tales of Arcadia culminates in an apocalyptic battle for the control of magic that will ultimately determine the fate of these supernatural worlds that have now converged."

During the third season of Trollhunters, Merlin (David Bradley), one of the most iconic wizards, appeared, and during an interview with Collider the show's executive producer Marc Guggenheim all but confirmed that Merlin would be back. "I will say that Merlin is a wizard... That's about as much as I can get away with," he said. Thus fans should probably expect to see some familiar faces in Wizards.

However, before the Tales of Arcadia comes to an end with Wizards, fans can enjoy 3 Below, which follows two royal teenage aliens, Aja (Tatiana Maslany) and Krel (Luna), and their bodyguard who flee a surprise takeover of their home planet by an evil dictator and crash land in Arcadia. On the run from intergalactic bounty hunters, they struggle to blend in and adapt to high school while also trying to repair their ship so they can return home and defend their planet. Aja and Krel were introduced in the third season of Trollhunters while they helped Jim and the rest of the Trollhunters fight against the evil Morgana.

In the interview with Collider, Guggenheim noted that 3 Below would be a bit different than Trollhunters. "I think Trollhunters is a classic, Campbellian hero story like The Force Awakens, telling a very tried-and-true story that you've seen the classic structure of," he said. "3 Below is a lot wackier and a much more unconventional show. I'm just as proud of 3 Below as I am of Trollhunters, just for completely different reasons."

Needless to say, there's a lot to look forward to with the final installment of Tales of Arcadia. And until it premieres, fans and newcomers can watch Trollhunters from beginning to end. So whether you've already seen the series or have never watched it before, now's the perfect time to see what all the hype is about.

This article was originally published on May 30, 2018