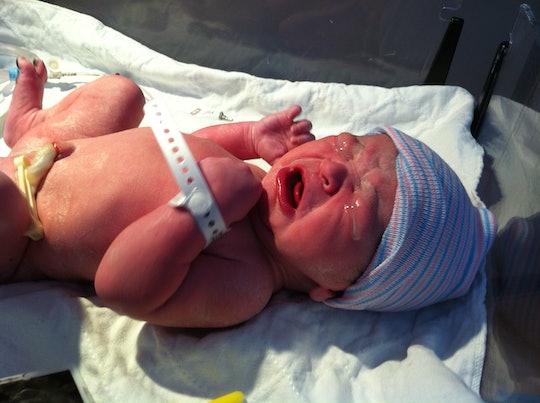 When Will Your Baby Undergo The APGAR Test? It's Pretty Important

You hear a lot about the APGAR score when you have a baby, but setting your little one up for their very first test sounds scary. When will your baby undergo the APGAR test exactly? What's the difference between a low APGAR score and a high score? Is it just determining the health of the baby, or is there more to it?

Developed in 1952 by Dr. Virginia Apgar, the APGAR test is devised to assess the vitality of the newborn. It's also an acronym — A.P.G.A.R. — and it stands for appearance, pulse, grimace, activity, and respiration. It's a scale ranging from one to 10, where one is of the most concern, and 10 is the least, according to the American College of Obstetricians and Gynecologists. And this test is done fast. It's completed immediately after your child is born, and must be finished within the first five minutes.

If you were wondering why they were poking and prodding your baby while they lay on your naked chest, still connected by umbilical cord, this is why. The reason for the alacrity in testing, according to ACOG, is that it gives the doctors a quick assessment of the child's physiological condition, assuring that intervention is not required. By evaluating the baby's color, breathing, and reflexes, they have a baseline as to what they need to do.

So what does the APGAR score mean? According to ACOG, a score of one to three requires immediate intervention — there's an issue of prematurity, birth injury, birth defect, or genetic disorder, and there's typically a cardiac or respiratory problem present, so the baby will be treated with haste. A score of four to seven means that intervention is likely necessary, and that the baby may not be responding appropriately to any or all tests. A score of eight or above is generally considered healthy.

Does it happen more than once? When will your baby undergo the APGAR test again if they repeat it? According to the American Pregnancy Association, the APGAR test will be repeated at five minutes, and again at five minute intervals for babies scoring below a seven on the scale. It's important to mention that many babies have an initially low score on the one minute test because of high-risk pregnancies, C-section, or a complicated labor and delivery, according to Neumors Health System.

My son's one minute APGAR was a six. He was a very complicated birth, and had a compound presentation with a compressed cord. By the 10 minute test, he'd risen to a nine. Apparently, getting a 10 is really difficult, according to ACOG, and my son was a teeny bit jaundice, preventing him from getting a perfect score.

If you have multiples, not much changes. According to ACOG, this does not change the test, but because of limitations of any standardized testing, it's not always the best judge of health in a complete manner. Rather, it's a rapid-response assessment meant to determine need for immediate intervention, and does not predict future health. If you're concerned about the APGAR score your baby received, talk to your pediatrician and follow up with them about your baby's specific needs.

More Like This
Dealing With Postpartum Back Pain? Physical Therapists Share Their Tips
32 Zippy Girl Names That Start With “Z”
41 Airy Aquarian Names Perfect For Your Little Water-Bearer
40 Very Vibrant Boy Names That Start With V
What Parents Are Talking About — Delivered Straight To Your Inbox