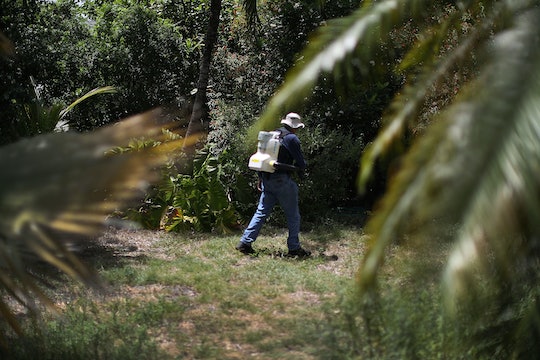 When Will Zika Mosquitos Arrive In Washington D.C.? It Might Get Congress Moving

For most of the year, Zika has been just boiling under the national conversation. But now that Zika mosquitoes have been spotted in Florida, it's only a matter of time before Zika mosquitoes arrive in Washington D.C. — and the movement of pests might just get Congress moving on approving an effective Zika funding bill. Of course, even if they move now, like right now, it could be almost too late.

That sounds alarming maybe, but the response to Zika in the United States has been a little slow to come around. Maybe Congress didn't think it was a big deal. But there have been 14 cases of locally transmitted Zika virus in Florida over the past week. "Locally," in this case, means that people contracted the virus from mosquitoes that were already in the area and not bringing it home from other places.

It's a big deal, especially for pregnant women or women thinking about getting pregnant anytime soon. Already, the Centers for Disease Control has issued a travel warning, not for a foreign country, but for Miami, Florida. The cases of Zika in Florida have so far been contained to the same 150 square mile area so it's still semi-contained. But it's highly likely at this point that the mosquito could travel northwards as the weather stays warm, just as the CDC predicted earlier this spring.

Earlier this year, President Obama asked for $1.9 billion in emergency Zika funding to spray for mosquitoes and provide healthcare for those affected. The bill has been locked in Congress, since the Republicans have added the Hyde Amendment rider, stipulating that no federal funds be used for abortions. The Democrats aren't having any of that — namely because Zika generally affects pregnant women and their fetuses in a much more detrimental way.

If a fetus is infected with Zika, it's likely to have birth defects, including microcephaly and other neurological disorders, so it's reasonable to allot funds for women's reproductive health. The bill also takes money from emergency Ebola funding that still hasn't been used, and in total, is just $1.1 billion, almost a billion less than the original request. It's a pretty big mess, since the Republicans are saying that after a vote on Tuesday, they won't revisit discussions. But Florida and the rest of the country need emergency funds as soon as humanly possible.

Right now, it's a lot of finger pointing. The Republicans counter-offered Obama's request, the Democrats took issue with it, and now it's at a stalemate. Cindy Pellegrini, a lobbyist for March of Dimes, which advocates for women's healthcare told Politico,

We have a hard time imagining an issue that could be more of an emergency than an infectious disease transmitted by mosquitoes that destroys babies’ brains in utero. The package looked like it was not designed to be successful and that was deeply troubling for us.

Something has to give, but as many Americans probably know, when it comes to the Hyde Amendment and talking about women's reproductive rights, there is never a lot of wiggle room. But someone should do something, and soon, because 14 cases of locally transmitted in Florida means that it's only a matter of time before there are more cases spreading up north. If no one talks about the realities of Zika and who it actually affects and gives in a little to approve some money to prevent the spread of the virus, everyone will have to shoulder a little bit of the blame.