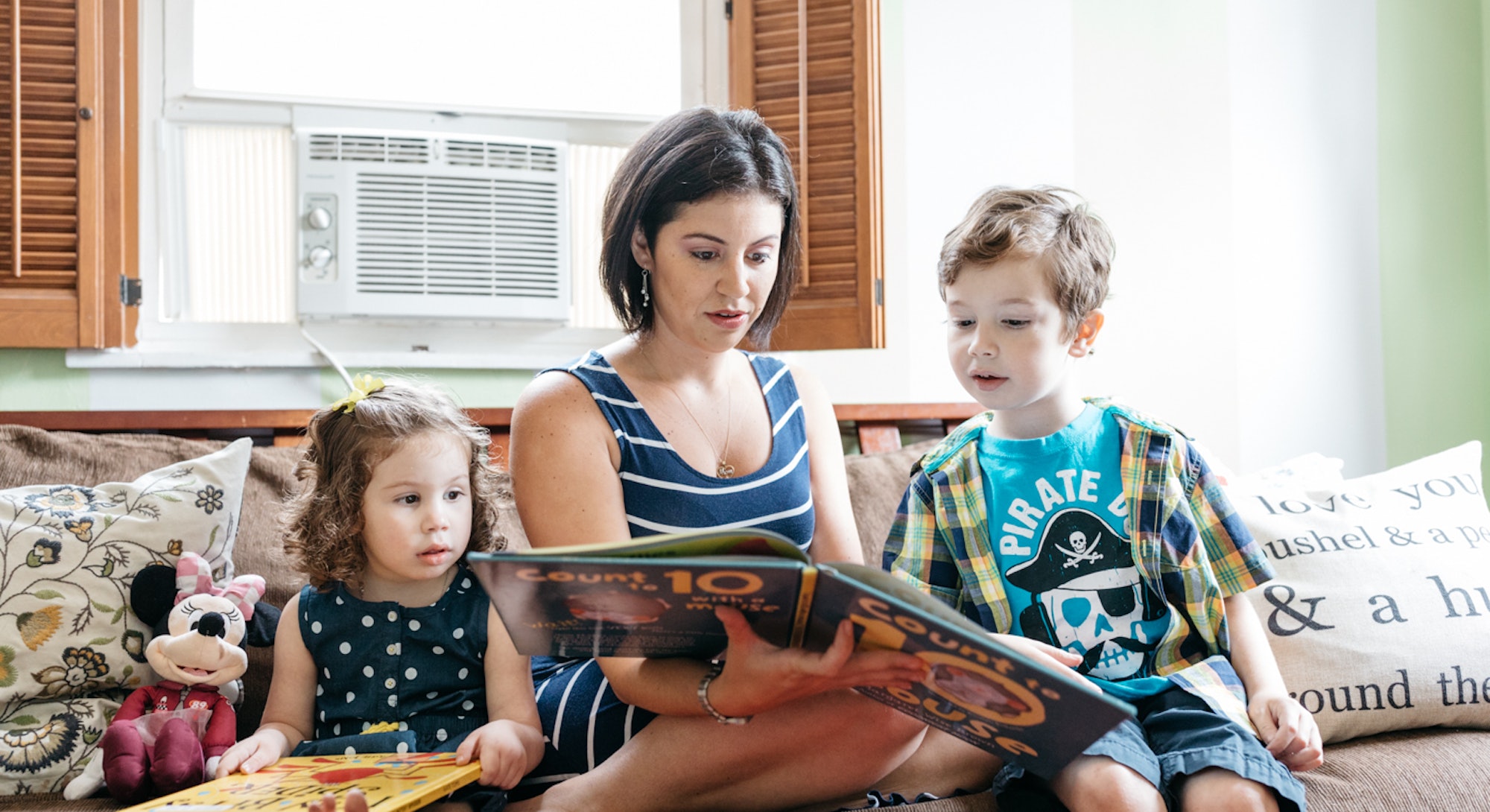 When You See My Happy Family At Church, You Don't See The Struggle

For Elise Murphy of Staten Island, raising her children Connor and Taylor is an exercise in understanding the spectrum of autism, and how the condition can affect children differently. Both Connor and Taylor have the a diagnosis, but it means very different things for their lives. Elise explains that Connor, now 7, is receiving intensive help with his condition but still struggles with concentration, social interactions, and transitioning between activities — which is a common challenge for children with autism; unpredictability and disruptions in routine can be incredibly difficult to navigate. Taylor, who is 3 years old, receives a great deal of early intervention therapy, but with this support is now progressing rather typically. Speaking to Elise, 35, I'm struck by how she balances the challenges of raising her children with so much love and honesty.

My son Connor is really energetic and spunky. We call him the director because he tends to direct people in how he wants things done. He is very in-charge, and he loves when people are engaged in his interests. For Connor his autism means that he had difficulty communicating early on. He didn’t really start speaking until he was four, and his conversational speech took longer.

Moving from one activity to another can often be very overwhelming for Connor. We have to prepare him for any changes in his daily life, even simple ones. For example, we give ample warning when we will be going in the car so he can have time to mentally prepare.

He does not know how to appropriately engage in conversation or play and often just growls at the other children or chases them, hoping that they'll catch on that he's trying to play "monsters." And he struggles to focus in school, which is hard because he loves learning and is so smart.

Taylor is sweet and adorable. All she has to do is make some cute remark or say some word funny, and we melt. For Taylor, autism was a very sensory-related diagnosis. [Some individuals with autism have a type of Sensory-Processing Disorder that causes sensory-seeking behaviors, such as chewing, spinning, and squeezing, that interfere with daily activities.] Taylor's sensory-related issues show up in a plethora of ways. The first one that was recognized was her constant need to have my cheek pressed up against her cheek.

It altered her social engagement with peers. She wouldn’t really recognize when people walked in the door because she was so focused on sensory-seeking behaviors. She also played completely inappropriately with her toys and still mouthed things. When she was 17 months old, I noticed some of the words that she had been mastering had disappeared from her vocabulary.

With the assistance of intense occupational therapy, we were able to equip her with better coping skills, [and] Taylor has skyrocketed. I don’t see the diagnosis anymore. She fought the path that she was headed on and has surpassed our wildest expectations. She is now going into Pre-K. She knows her alphabet, and she’s singing, dancing, and engaging with her peers.

I am always fearful of saying how well she is doing, because with our son there were times that we would be told by well-meaning people that they didn’t really see that he was autistic. It sort of gave me false hope that he would eventually have no difficulties whatsoever. And that isn’t the reality for him, but that is the reality for our daughter. I feel almost like a tinge of guilt that [she is doing so well].

Connor’s autism requires me to be a very engaged parent. I am able to recognize the non-verbal cues. I can tell if an environment will be a little too much for him, if the noise is too loud or if the crowd is too big. I can see him about to escalate. My husband is a first responder — he works for the FDNY —and he’s always on alert: The tones go off, and he’s ready to work. I feel the same way on a much smaller scale — I’m not fighting fires, but I am fighting Connor’s fires. So I am always ready and always prepared. If you met me before kids, I was never prepared for anything. That has been an interesting transformation for sure.

I never was very focused on my future in general, but having kids like mine, you become future-oriented very quickly. Connor’s future is kind of open-ended. He’ll definitely need support. He’ll always need help in most areas. But not everything is off the table. College is not off the table. Things like marriage are still possible for him. I haven’t stopped dreaming about that yet.

And so we proceed as if that is the future, and everything that I do is to give him the support to get there. I make sure that he has [state-provided] community-habilitation services to help with basic daily living and social skills, like learning to bathe, dress, and feed [himself]. We are also spending time in the community, for example, at parks or museums, where social engagement would happen organically. I make sure that he’s doing his homework so he can get into the local college. I want to tap into the things that I find that he really loves — anything to engage his mind so that future is possible.

I don’t think others see how much of a struggle all of this is. My mom tells me all the time that I make it look too easy. It is hard to speak about. From the outside, my children don’t look any different from anyone else's children. And some of the time, there are no behavioral issues and there are no meltdowns. And there are smiles and joy and laughter. But then other times, there's carrying a 7-year-old into the car because he can’t leave a particular building.

Constantly worrying and preparing for whatever's about to explode can mentally beat you down. And there is the actual struggle of physically getting out of the house. We just received the New York State Medicaid Waiver [which provides access to Medicaid funded services for children with permanent disabilities]. This allows us respite care — it's basically babysitting, but because our children can sometimes be too difficult for the local teenager to care for, we hire professional caretakers to give us a break. With [this] help, we were able to attend our first family pool party where I was able to bring Connor [with the help of the caregiver] and not feel like I was drowning, metaphorically speaking.

There is something about losing your identity in all of this that happens just quickly and without warning. It takes a lot of effort to gain it back. For example, I was extremely involved in my church. I sang every Sunday. Even when the kids attended church and were good, I was sitting there, waiting for the next meltdown. So I had to take about a year and a half off from going to church — feeling more alone than ever. Now on Sundays, while I go to church, they go to the ABA therapy center, A Friendly Face. [Applied Behavior Analysis, or ABA, therapy is used to help individuals with autism create behavioral strategies in order to improve social interaction]. It’s changed everything about who I am. I’m singing again.

Recently, our son lied to us about watching a video on youtube that we had specifically asked him not to watch. That's something almost no parent would [want], and we didn't say this to his face, but once we closed the door, we were like, “This is amazing.” Children on the spectrum can often be literal. They have difficulty understanding jokes, especially sarcasm, rhetorical questions, words with multiple definitions etc. Often, this means [they] have difficulty lying. The fact that Connor has the capability for such an abstract concept [is] reason to celebrate. That’s an example of where we find joy in the strangest things. He lied! It was cool. Of course he was punished after, but he lied!

I don’t know if you’ve ever watched a flower bloom in slow motion, but usually you just look outside and there are flowers. My experience of parenting is like watching a flower bloom in slow motion. You don’t usually see the process, but in this situation you see the process. You’re watching everything in slow motion. My children are developing at a snail's pace for Connor and a slug's pace for Taylor, but they are really unfolding beautifully. And I get to witness all of it. So not a moment is missed. When they are lying through their teeth about watching videos, it’s not missed. And that’s the coolest part of all of this.