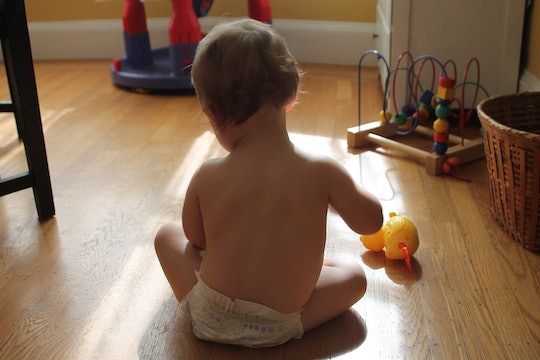 When You're A Mom Who Can't Afford Childcare, Life Is Exhausting

It’s no secret that childcare costs in America are through the roof, and it’s no secret that many American families struggle financially. While in some countries childcare is subsidized by the government, in the United States families with children are left to work it out on their own. The cost of childcare is greater than what one parent can earn going to work, even though childcare providers aren’t actually paid all that well, and yet, most parents have no choice but to work. In my family, childcare is so cost prohibitive that it isn’t even a real option, and not being able to afford childcare has literally affected every aspect of our lives.

The average cost of childcare in Michigan, where we live, is almost as much as my entire family made last year. Now, we earned less last year because for a pretty big stretch of time I was unable to work due to a hellish pregnancy and recovery. Because I do work now (as a writer), we’re already set up to make considerably more in 2016 than we did in 2015, yet childcare is still well out of our financial reach. After very basic living expenses such as housing, food, and utilities, there isn’t a whole lot left over, and there certainly isn’t enough left over for something like sending the baby to daycare, even a couple of days a week.

So what do we do? Well, the most honest answer to that question is “everything.” Not being able to afford childcare and not being able to afford to have one us be a dedicated stay-at-home parent means that my spouse and I are engaged in a constant juggling act in an often futile effort to get everything done. Between caring for the baby, housework, her job, and my own, it's extremely rare that we’re not both actively engaged in some form of work. It is even rarer still that we are both free from work long enough to, you know, talk to each other.

Every day the baby wakes us up before my wife’s alarm even thinks about going off, and we spring into action. She changes his diaper (she almost always takes the first diaper of the day, since I am sure to get more than my fair share being home with him all day long) and then she goes to start the much needed coffee while I nurse him. Then one of us entertains the baby as the other makes breakfast, and while all of that’s going on, someone has to find a moment to feed the cats. When everyone’s been fed, my wife has to get dressed and ready to get out the door.

After she leaves, my day begins. Our son is now getting to an age where he’s more mobile, which some days means he’s more independent, and other days means that he requires even more constant attention and engagement. I try to be as present and emotionally available as I can be, while also constantly on the lookout for those ever-so-short stretches of time where I might be able to get something else done. As soon as he naps, I’m diving into a writing project, but some days those naps are unpredictable and sporadic, and it can make working more stressful than it ought to be.

For families like mine, there just aren’t other options. If we ever do want a break, we have to rely on favors from friends and family, which are not always a given.

Children are very observant, and when my son picks up on my heightened stress level, he becomes more fussy and demands more attention. And so it goes, the two of us in a constant cycle of anxiety and busyness. There are the rare days when everything matches up, but mostly I’m lucky if I get a decent amount of work done, and even luckier if I get a chance to eat an actual lunch. It shouldn’t be like this; I shouldn’t have to subject myself and my son to this level of multitasking, but this is what’s necessary to keep a roof over our heads and food on the table.

When my wife returns from her job at a busy restaurant, we’re both tired and wishing that we could just relax with our family after a long day. Instead, there are chores to be done, dinner to start, and the constant trade back and forth of who is with the baby. We try to keep our living room fairly well baby-proofed and give him free roam to explore, but you can bet that the second we’re both in the kitchen is the second he’ll find something weird to put in his mouth.

Immediately after dinner our son needs his nightly bath, and while my wife is washing him and singing "Baby Beluga," I attempt to pick up the toys in the and vacuum under the high chair (because lord, does it need it). We trade on and off throughout his bedtime routine (jammies, story, nursing, crib, song) and then, if he goes to sleep quickly, we have about five minutes to stare at each other before I jump into all the work I wasn’t able to finish during the day, and my wife attempts to clean up the kitchen from dinner. Depending on the kind of day I’ve had, catching up on work can last as late as midnight.

I am always tired, always running on empty, and not always as present for my child as I want to be. That makes me feel like a pretty crappy mom some days, and that's not a pleasant way to feel.

And then we’re up again at five the next day.

To say that this pattern is tiring is a gross understatement. It’s absolutely untenable and unmanageable, the kind of heightened level of activity that one can really only sustain for a few days before beginning to break down. But, sustain it we must. For families like mine, there just aren’t other options. If we ever do want a break, we have to rely on favors from friends and family, which are not always a given.

Not being able to access childcare means I am always tired, always running on empty, and not always as present for my child as I want to be. That makes me feel like a pretty crappy mom some days, and that's not a pleasant way to feel. I hear other parents talk about the quality time they spend with their children after they come home from daycare, or after a regular day with a nanny or sitter, and I try to imagine what that must feel like. But honestly, I try not to think about what it'd be like to afford stable, quality care too much, because I’ll probably never know. I don’t have time to miss my kid or be excited to come home to him. Instead we're just… always together, and I have to be on — all the time. That can suck the life right out of a person.

I absolutely love that I get to spend so much time with my child during this early stage of his life, I adore that I haven’t missed a single milestone. But honestly, when I talk to friends with babies who go to daycare three days a week, I’m overcome with so much jealousy I can hardly breath.