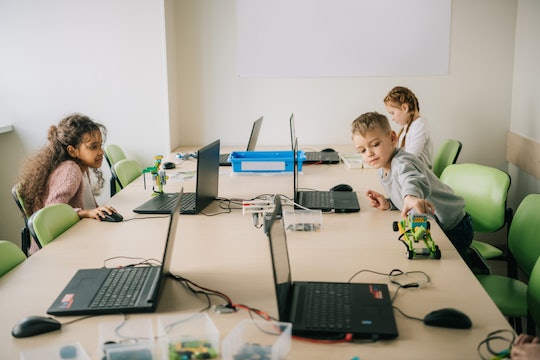 Every year in late April, workplaces around the country are suddenly overrun with kids. That's thanks to Take Our Daughters and Sons to Work Day, when children get to spend time with a parent or grown up learning all about their job. The day can be hectic, fun, and hopefully inspiring.

Take Our Daughters and Sons to Work Day (henceforth known as TODASTWD, because what a mouthful) is always held on the fourth Thursday in April, according to Forbes. This year, that falls on April 25, 2019. More than 40 million kids participated last year, according to the TODASTW Foundation, and contrary to what I gleefully believed when I was 10, it's about so much more than sneaking a few hours away from school.

The annual event was founded as Take Our Daughters to Work Day in 1993 by feminist icon Gloria Steinem and the Ms. Foundation for Women, according to Marketplace. Time magazine noted that it was born out of a time when women's roles in the workplace were being more widely discussed, thanks to historic elections in the House and Senate and the national conversation about workplace harassment jumpstarted by Anita Hill's testimony during Clarence Thomas's Supreme Court confirmation hearings. It was envisioned as a way to show girls and young women what sort of career paths were open to them, and empower them to pursue their dreams.

In those days, the boys got left behind at school — I remember the males in my class spending the day watching movies and just generally goofing off, because it didn't make the sense for the teacher to work on any new material with half the class gone. But ten years after its original inception, boys were included and it became Take Our Daughters and Sons to Work Day. That change was helped along by a lawsuit that alleged the event was sexist for leaving out boys, according to The New Yorker.

The inclusion of boys has changed the day's original mission a bit, obviously. Steinem told The New Yorker that she'd hoped to include boys in a totally different way. She'd envisioned a Take Our Sons Home Day, which would have exposed young men and boys to the hard work that goes into running a household. The idea never got off the ground, however.

Now, TODASTWD aims to show both boys and girls what it's like to work and think about how they may fit in to the workplace. Reader's Digest noted that many major companies put together special programs to help employees and their children make the most of the day.

If you're hoping to take your child to work with you on April 25, check with your employer about the plan. If they don't have anything in the works, it's not too late to set something up. The TODASTW website offers planning resources to help companies design a fun and productive schedule for visiting kids. Besides being a great bonding experience, you might just open up a whole new world of dreams and goals for your child.